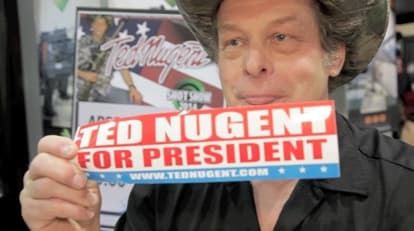 Ted Nugent during his interview with Guns.com where he referred to President Obama as a “subhuman mongrel.”

A Native American tribe has canceled an Aug. 4 concert by Ted Nugent at its Idaho casino after learning of the rocker’s controversial comments earlier this year about President Obama, the Associated Press reports.

The Coeur d’Alene Tribe said on Monday that the cancellation at its casino in Worley, a town about 40 miles east of Spokane, Washington, for his “racist and hate-filled remarks.”

The comments in question occurred during an interview with Guns.com at the Shooting Hunting Outdoor Trade Show where the gun-rights advocate referred to Obama as a “subhuman mongrel,” which he later apologized “for using the street fight terminology of subhuman mongrel.”

The tribe said it booked Nugent without realizing he espoused “racist attitudes and views,” but did not detail to the newspaper which of Nugent’s specific views it opposes.

A few states over in Wisconsin, some residents in Oshkosh are calling for Nugent’s appearance at the music event Waterfest to be cancelled, Gannett Wisconsin Media reports.

However, the show’s organizers have stood by him in support. Waterfest President Mike Dempsey said they have not received any complaints since a local newspaper published an opinion piece calling for the cancellation. Otherwise the show has sold more V.I.P. tickets for Nugent’s show than any other premium show this summer.

Keeping up with his style, Nugent’s response to the Oshkosh critics was a bit more over-the-top than the organizer’s.

“By all indicators, I don’t think they actually qualify as people, but there has always been a lunatic fringe of hateful, rotten, dishonest people that hate happy, successful people,” Nugent told the newspaper.

In addition to the cancellation at Idaho casino, a town in Texas paid Nugent about $16,000 for him not to perform at its Fourth of July Festival, and a protest is planned for his show this week in Montclair, New Jersey.