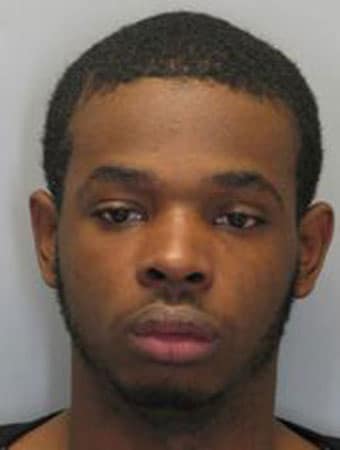 Nigel Sykes did not receive good customer service from the pizzeria employees the night he attempted to rob them. (Photo credit: Delaware Online)

A man serving a 15-year sentence for the 2010 robbery of a Newport, Delaware, pizzeria has filed a lawsuit against the restaurant, claiming the employees used “unnecessary” force against him when they tackled him and beat him after he produced a handgun and was taking money that did not belong to him.

Nigel Sykes made his way through the back door of Seasons Pizza just before 8 p.m. on Nov. 30, 2010. In his complaint, which was filed last year from prison, Sykes openly admits that he robbed the pizzeria, almost making out with $140.

But as Sykes neared the door to  make his getaway, employees of the pizza place banded together to stop him from getting away. Apparently one employee grabbed Sykes from behind while other employees wrestled the gun from his hands. An accidental discharge occurred, narrowly missing an employee and striking a trash can instead. The bullet hole ridden trash can still remains in the restaurant to this day, marked with the name of the employee who was almost hit by the blazing bullet.

“After a short struggle, the defendants successfully obtained the handgun from me,” Sykes stated in his complaint. “That is when the assault began. All of the Seasons Pizza employees participated in punching, kicking and pouring hot soup over my body. I was unarmed and defenseless and had to suffer a brutal beating by all of the employees of Seasons Pizza.”

The 23-year-old who has no attorney and filed the suit with a self-written complaint, is now seeking monetary compensation to the tune of $260,000, or $20,000 from the employees accused of assaulting him, $20,000 from each of the two arresting officers and $100,000 from the pizzeria itself.

However, executives at Seasons corporate office told reporters all of the treatment Sykes endured was a direct result of his decision to rob the place. Although Sykes admitted to the robbery, he also said, “I’m not good at making good choices.”

Nonetheless, bad decision or not, Andy Papanicolas, the director of operations at Seasons said, “It’s a mockery. It’s a joke for it to even make it to the courts. It’s pretty pathetic.”

In addition to the unnecessary roughness experienced at the hands of the employees, Sykes also alleges abuse from the responding officers.

“I was aroused from my state of unconsciousness, only to realize that I was handcuffed and being tasered,” he pointed out.

Sykes says the officers refused to provide him with needed medical care and one of them even used a racial slur.

But this wasn’t the first time Sykes claimed to be mistreated by his would-be victims and authorities either. In fact, he filed another complaint previously in 2011, which was dismissed because he did not follow the proper procedures in filing the complaint, which has slightly different details than the newest suit.

In the 2011 complaint, Sykes still asserts that the employees used unnecessary force, pointing out that time that they beat him repeatedly with pots and pans.

However, in that complaint, Sykes also claimed that he was not the one at fault for the robbery, but rather he too was a victim. He said he was robbed at gunpoint outside of the pizzeria, and the assailant “then forced me, after giving me a gun, to [rob] a nearby Seasons Pizza. … I complied with his commands and proceeded to rob the establishment.”

Nonetheless, regardless of the true motive, Sykes was already well-known by local authorities. In fact, when he was arrested after the failed robbery attempt at Seasons, authorities determined that he was linked to at least eight other robberies, which included a bank, three other pizzerias, two fast food restaurants and two convenience stores.

Sykes pleaded guilty to five of the 51 total charges against him, but later attempted to withdraw his plea, claiming that he had not taken his medication that day. The court denied his request to withdraw, citing that he had no previous history of mental issues, nor was he documented as being on any medication.

“It is a joke lawsuit,” said Newport Police Chief Michael Caproglione. “It is sad to see this kind of suit being looked at. The court shouldn’t waste the taxpayers’ money.”

Attorneys for the officers involved in the incident filed a motion earlier this month to have the complaint dismissed.