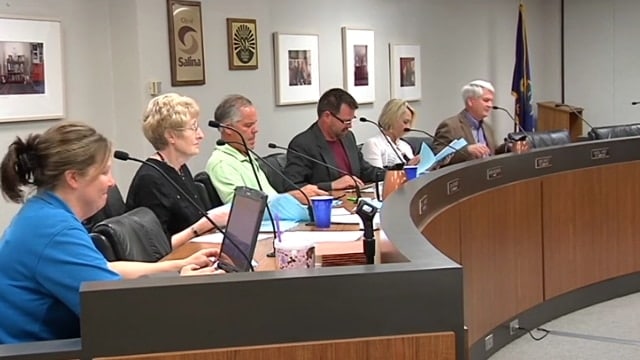 City leaders in Salina have voted against open carry in city buildings, presumably to include Stormtroopers. (Photo credit: kwch.com)

Salina, Kansas, a town that has seen its share of oddball gun stories this month, has now prohibited open carry in city buildings.

City commissioners voted Monday to approve an ordinance that would forbid the open carry of guns in a number of publicly-owned buildings ranging from the animal shelter to several wastewater monitoring, maintenance and administration buildings.

Even though Gov. Sam Brownback signed a comprehensive gun rights bill earlier this year that both expanded carry rights and preempted local ordinances against them, the state legislature granted Salina a four-year exemption. Using this, the city currently prohibits legal concealed carry in many of its buildings, to which it now has added open carry.

“Staff believes that actions approving either a full prohibition of the open carry of firearms in all municipally owned facilities or a prohibition applied to those buildings in which concealed carry is currently prohibited would be consistent with the city commission’s prior action regarding concealed carry,” said City Manager Jason Gage at Monday’s session.

However, some in the city argue as to whether the move was needed.

“In my mind anyway this hasn’t been a real issue,” said Salina City Commissioner Randall Hardy. “I’ve been here 30 years and I’ve never seen a gun on anyone.”

Nonetheless, the town has seen its fair share of media attention on firearms in recent weeks.

On July 7, a portion of the city went in lock down when police received calls that a uniformed person with what was said to be an AK-47 was roaming around the streets that morning. The subject in question was found to be a local man dressed in a Star Wars Stormtrooper costume and carrying a plastic blaster rifle.

A week later police were called to a local movie house where a concealed carry holder was ‘printing,’ with his holstered handgun outline visible through his clothing. The legally carrying permit holder was asked to leave.

With the new signs to be installed at select city buildings prohibiting both concealed and open carry, the council will likely revisit the current plan in four years when their exemption of the new state law will sunset.

Possibly in a galaxy far, far away.