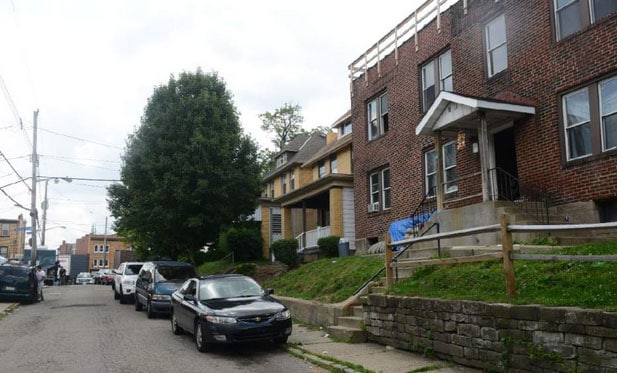 The neighborhood where the attempted robbery occurred is currently being used as part of the set for the movie “Southpaw.” (Photo credit: Trib Live)

One man is dead and another is in critical condition after they broke into an apartment in Pittsburgh’s Carrick neighborhood early Tuesday morning and found an armed resident on the other side of the door.

According to local media, it was about 2:20 a.m. when several neighbors were awakened by the commotion. Public Safety spokeswoman Sonya Toler confirmed that the two suspects shot up the door to the apartment before kicking it in.

Once inside, the suspects shoved the resident into the bedroom declaring, “We want your stuff.” But the 19-year-old tenant grabbed his shotgun instead and fired a total of three shots, striking both suspects.

When officers arrived they found 27-year-old on the front steps of the building suffering from a gunshot wound, with a handgun — assumed to be his — lying on the ground nearby. He was transported to the hospital where he remains in critical condition. If Thomas survives, he will face charges for aggravated assault, burglary, robbery, conspiracy and carrying a firearm without a license. Pittsburgh police determined that Thomas was also wanted on rape charges from an unrelated incident in April.

Another neighbor, who did not wish to be identified, said he saw Thomas in the hallway and offered to help put pressure on the wound, but Thomas refused his help.

Once responding officers entered the apartment, they found the second suspect, 31-year-old David Calhoun. He was pronounced dead at the scene.

The resident and his 17-year-old girlfriend, who was also in the apartment, were not injured.

Michael Ferita, who is acquainted with all of the involved parties and called the incident a “horrible thing,” said he wasn’t sure if the suspects and the victim “knew each other personally, but I knew they knew of each other.”

Ferita also said the resident was “one of the most laid-back, chill, hippie kids. … Like, he loves everybody. I’ve never seen the kid raise his voice, let alone fire a gun. That’s not like him at all.”

At this time, no charges are expected to be filed against the resident, whose name was not released.

“He was within his rights to have a shotgun in his residence,” Toler said.

Clara Hicks, who also lives in the apartment building, said although she heard nothing that morning over the sound of her air conditioner, she wasn’t at all surprised to learn of the incident.