Adams Arms slashes prices, gets busy with 300 BLK and much more 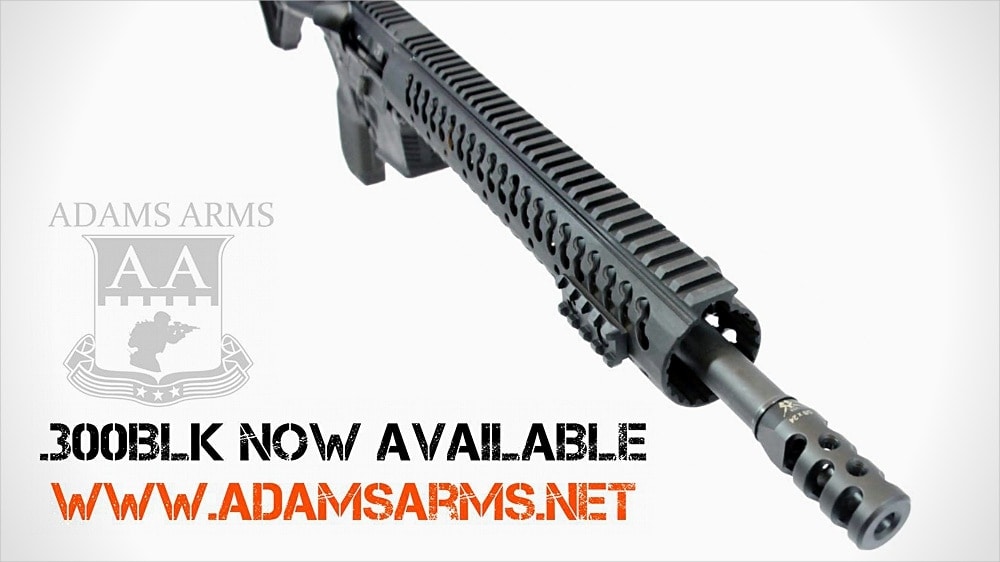 Adams Arms has slashed prices across the board, thanks to its new completely in-house production facility. The company is now manufacturing everything under the same roof which not only lowers its building costs, it ensures that everything is made to its standards.

“We are extremely excited to be able to reset the bar from a product cost standpoint while delivering the highest quality products on the market,” said Adams Arms’ president and CEO Michael Froning. “While the industry is seeing reduced prices to combat lagging sales, we have been able to drive our costs down significantly and pass on savings of over 20 percent to the consumer”

The company was already one of the most affordable manufacturers of piston-operated AR-15s and now they’re even more approachable. With these new prices many people who have been curious about piston-driven ARs but couldn’t justify the premium don’t have to worry about that anymore.

A lot of people are going to find out just how nice and clean ARs can really be. Previously Adams Arms rifles had MSRPs in the $1,200 to $1,600 range, but now its base rifle is priced at just $995.

The company also plans to add a wide range of new products, with more announcements to follow in the next few weeks. And not just more AR-15-type firearms, it’s going all out and have stated it plans to unveil new “.308 rifles, pistols, .22 rifles, shotguns, custom slides, projectiles [and] accessories.”

One of Adams Arms’ new AR-15 pistols. These, like their other firearms, are piston-driven. (Photo credit: AA)

A piston-driven AR-10-style rifle alone would set Adams Arms apart from the pack of black rifle manufacturers — a complete catalog of firearms this broad will push the company into a different class of company.

Adams Arms has already listed two AR-15 pistols on their website, one 7.5- and one 11.5-inch, just begging for arm braces. These pistols are based on their Tactical Evo series and have free-floating modular Samson handguards and come with a set of fixed sights.

We look forward to seeing what else Adam Arms has got up its sleeves.

One new venture for Adams Arms are rifles and uppers in .300 AAC Blackout. The company just announced its first 300 BLK rifle and will also be selling uppers separately.

On the rifle the compensating brake is permanently attached. The standalone upper is not fixed and is subject to NFA regulation unless the user has it pinned and welded. This also gives people who buy the upper by itself the option of swapping out the muzzle device if they’re looking to install something else, such as a suppressor mount. Adams Arms will offer the upper with a permanently-attached muzzle device down the line.

The 300 BLK rifles and uppers can be modified with Picatinny rail sections. (Photo credit: AA/Facebook)

Other features that round out their 300 BLK parts include a long, free-floating modular Samson handguard and a QPQ Melonite finish on the barrel, inside and out. This type of black nitride finish is tougher than chrome and more accurate, too. And of course, they use Adams Arms’ clean-running adjustable short-stroke piston system.

The complete rifle is finished with Magpul MOE furniture and is supplied with a 30-round PMag where legal.

The 300 BLK Tactical EVO rifle has an MSRP of $1,476.90 and the standalone upper just $888.52. Street pricing is generally going to be a bit less, particularly on the complete rifle.

All the details and specifications can be found on the Adams Arms website, and for up-to-the-minute news head over to their Facebook page.