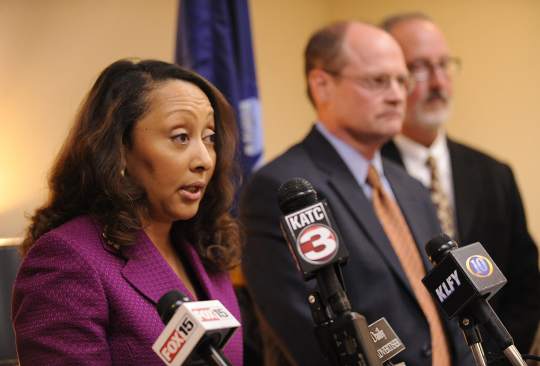 U.S. Attorney Stephanie Finley at a press conference in Louisiana talking about an unrelated incident.

A U.S attorney in Louisiana wants felons carrying guns and dealing drugs to watch out. With the Project Safe Neighborhoods, local law enforcement and the feds are working diligently to enforce current laws.

“Felons carrying weapons is a violation of federal law,” said Stephanie Finley, U.S. attorney for the Western District of Louisiana. “The defendant’s situation was further complicated by also possessing an illegal substance and had stolen the weapons. The U.S. Attorney’s Office will continue to vigorously prosecute felons who possess firearms while in possession of illegal drugs.”

The statement comes after a U.S. district judge sentenced convicted felon Corey Moses, 36, from Monroe, to 10 years in prison and three years of supervised release for illegal possession of marijuana with intent to distribute and possession of firearms.

According to evidence presented at the Nov. 15, 2013 guilty plea, police stopped Moses for speeding on Dec. 9 and during the stop, he consented to a search of his vehicle. Police found marijuana, two 9mm pistols and a .380 pistol.

“Under our Project Safe Neighborhood Program, we have joined with our state and local partners to assure that convicted felons like Moses are identified, arrested and prosecuted,” Finley said. “Our goal is to remove convicted felons, violent offenders, drug traffickers and others who carry and use firearms from our streets and neighborhoods. We want to make sure that each citizen feels safe and secure.”

Sterlington police officers stopped the vehicle Moses was driving for speeding on December 9, 2010. Moses consented to a search of the vehicle, and police found marijuana, two 9 mm pistols, which were stolen, and one .380 caliber pistol.

Moses had been previously convicted in Monroe of theft in 1996 and burglary in 1997. He was also convicted in October 2007 in Providence, Rhode Island, of carrying a firearm by a person convicted of a felony.