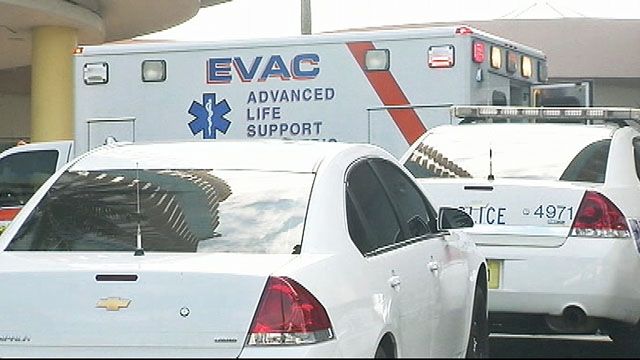 Police and first responders rushed to the scene of an alleged negligent discharge in a Daytona Beach resort Thursday. (Photo credit: WFTV)

A 59-year-old man is facing charges of culpable negligence after he fired a round from a handgun through his hotel wall and injured a young boy on vacation in Daytona Beach, Florida.

Davis Scott, a Georgia resident, was unsure whether the gun’s safety was on, then “squeezed the trigger” and discharged a bullet that traveled into the wall of the unit which penetrated into the room next door, according to the Daytona Beach News Journal. There, the round injured an unidentified 12-year old at the Wyndham Ocean Walk Resort Thursday morning. The boy, vacationing with his family from Kentucky, was only lightly injured and was not hospitalized.

The gun owner maintained the discharge was an accident. According to reports, when he noticed his 9mm Makarov had fallen out of its holster while unpacking his suitcase, he removed the pistol’s magazine, pointed the gun at the wall, and pulled the trigger.

“Whether he (the boy) was hit by the projectile, or by sheet rock, we want him (Scott) charged,” Daytona Beach Police Chief Mike Chitwood told local media. “I don’t buy the accidental discharge story. A gun can only go off when you press the trigger.”

As such, Chitwood has sent charges to the State attorney on Scott, who has an expired concealed carry permit. In Florida, the charge of culpable negligence, should prosecutors seek an indictment, can be pursued as either a felony or a misdemeanor depending on the level of gross recklessness, or wanton disregard in the case. This could mean that Scott could face as much as five years in prison.

According to fundamental rules for safe gun handling advocated by the National Sports Shooting Foundation and the National Rifle Association, shooters are encouraged to always treat a gun as if its  loaded, be sure of their target and what’s beyond it, and point the muzzle in a safe direction among others.

“We could have a dead 12-year-old kid here where a family is on vacation and somebody wants to be negligent with a firearm and it just doesn’t make any sense,” Chitwood told WFTV. “At the end of the day this is just stupidity and sometimes stupidity can cost a life.”