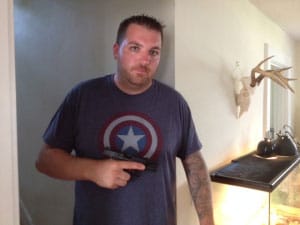 The intruder wasn’t quite so tough anymore once the resident pulled out his Smith and Wesson. (Photo credit: Fox)

An apparent burglary at a home in New London, Connecticut, early Wednesday morning left an armed hockey mask wearing 15-year-old intruder singing a different tune once he discovered his intended victims were armed as well.

According to a local NBC affiliate, Richard and Kevin Dennis were sound asleep when the teen first broke in around 3 a.m. But when Richard discovered the intruder inside their home, he quickly approached the boy.

“That’s when he hit me in the head with the gun. Then I picked him up and he started wailing on my back with the butt of the gun,” said Richard, who began to call out to his brother for help at that point.

“I heard my brother say, ‘Kevin, I need help. He has a gun.’ When I heard that, [I] grabbed my gun and went flying through the door,” Kevin said.

At that point the tables were turned on the teen, who no longer had the upper hand – or the only gun. Kevin, who is a Navy veteran who served in Iraq and Afghanistan, told the teen to “drop the fucking gun and get down.” The kid complied and suddenly became very apologetic of his actions.

“He just kept apologizing, saying he was sorry,” Richard recalled.

When the police arrived, they arrested the teen, who now faces charges for home invasion, burglary, second-degree assault with a firearm, first-degree threatening and carrying a pistol without a permit.

Richard received minor injuries during the ordeal, but by the time officers arrived he was already getting medical attention from Kevin’s girlfriend who is a nurse.

And according to Kevin, this wasn’t the first time they had been burglarized either. In fact, after they had returned home from vacation about three months ago, they discovered they had been victims of a break-in. The suspects, who were once again teens, were caught a short time later, but Kevin said one of them only got “a slap on the hand.”

When asked what he believed would have happened had he not been armed, Kevin told Guns.com that he still would have come to his brother’s aid, using a bat or whatever else would work to fend off the intruder and protect his brother.

But at the end of the day, Kevin admitted, “Honestly, I’m just happy I didn’t have to kill a kid.”