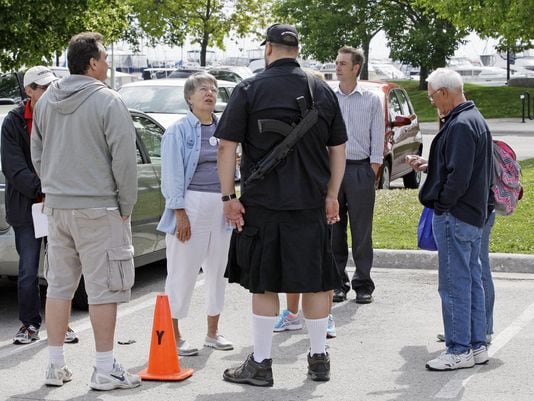 This came as a part of the governor’s wife’s “Walk with Walker” campaign to highlight a series of parks and trails throughout the state. Walker had come to Sheboygan to publicly traverse part of a two-mile trail through that city’s Deland Park. It was there that Polster joined the gathering, with a semi-automatic AK-style rifle, and two handguns.

“At first people were a little concerned and then very quickly found out that he was very gentlemanly and civil,” local County Chamber Executive Director Betsy Alles told the Sheboygan Press of Polster. “Some of the walkers started to ask him questions, and he answered very kindly. I don’t think people were concerned after that. I think it posed a dilemma at first, but everything worked out fine.”

For his part, Polster tactfully conducted the actual walk with Walker armed, but not openly carrying. While he secured his rifle in the trunk of his car, he carried his two handguns lawfully concealed under the aegis of his carry permit.

Polster told Guns.com that he did this to avoid having the event canceled, which could have led to negative publicity for the open carry movement.

“Given the threats made toward Governor Walker and his family it is understandable that she or her staff was uncomfortable with someone openly carrying. There was discussion that the event could be cancelled. I agreed to put my AK in the car and conceal the Glock. I was also carrying a Ruger LCP that was already concealed. I spoke with her security after I put the AK in the car and my shirt over my Glock. He was very polite and thanked me for concealing,” Polster said.

The gun rights advocate, known in the area for carrying publicly at the Appleton Farmer’s Market and sparking a social media war over his stroll through Germantown in March, believes that events such as the walk with the state’s first lady makes open carry more socially acceptable, which is the whole point.

Polster explained, “I’m glad the First Lady, Tonette Walker held the event even with firearms present. I believe the people opposed to it will always oppose it because of what it represents. I also believe that the people who are open-minded, like the ones at the ‘Walk with Walker’ event come to view open carriers in a new, positive light. I think that speaks volumes about how perceptions change.”

Polster vows to continue his interactions with the public.