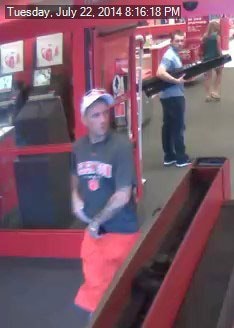 Apparently he wasn’t quite as sneaky as he thought he was. (Photo credit: Fox Carolina)

A South Carolina man wanted for pulling a gun on a Target employee last week after getting caught shoplifting was arrested Saturday while attempting to steal more merchandise from another Target store.

On July 22 at about 8 p.m., Daniel Lee Waldrop, 28, was allegedly caught trying to take items from a Greenville County Target without paying for them. According to a local Fox affiliate, Waldrop was seen placing items into a cart before slipping them into his pockets and trying to walk out of the store.

At the store, a loss prevention officer confronted Waldrop, but rather than confessing, Waldrop pulled a silver handgun on the officer instead. He eventually eluded authorities when he drove off in a cream-colored car, Greenville County Deputy Drew Pinciaro said.

However, less than a week later, police received a call about a possible shoplifter at a different Target store in Anderson, about 40 miles away from the first store. Apparently the store’s employees had recognized Waldrop from surveillance photos posted across various Target stores, as well as the distinctive tattoos on his arms. Not only that, according to authorities, Waldrop was also wearing the same clothes during both shoplifting incidents, making him even more recognizable.

When officers approached Waldrop at the second store, he attempted to pass off his brother’s identity as his own, but was unable to convince the officers. When Waldrop was searched, police found a glass pipe containing drug residue. Authorities did not say if the man was armed during the second incident.

Waldrop was arrested and now faces charges for armed robbery and possession of a gun during the commission of a violent crime, both of which are felonies. In addition, he is charged with misrepresentation of identity and loitering in a drug area. He is being held on a $20,000 bond.