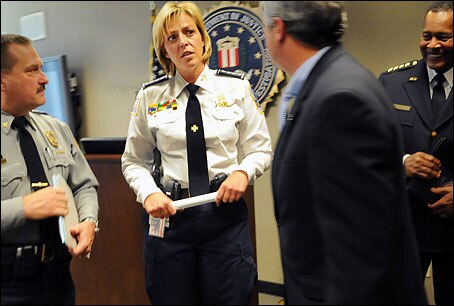 The Washington D.C. Metro Police is back to enforcing the district’s strict ban on gun carry outside the home after a federal judge allowed the city a 90 day window to draw up a new law Tuesday.

This came after Saturday’s release of an order by U.S. District Judge Frederick J. Scullin that struck down D.C.’s longtime ban on both open and concealed carry as being unconstitutional.

With that ruling taking effect immediately, Metro Police Chief Cathy L. Lanier on Sunday issued a set of temporary orders to her officers that allowed gun carry on the district’s streets for the first time since 1932. Now, with the order in place from Scullin to stay enforcement of his ruling for 90 days, this brief period of constitutional carry in the nation’s capital has ended.

“In light of the court issuing a stay of the Palmer v. District of Columbia order, Police Chief Cathy L. Lanier today issued a notice to members of the Metropolitan Police Department rescinding two teletypes related to firearms,” read a statement sent to Guns.com late Tuesday from Gwendolyn Crump with the department’s public information office. “All laws related to firearms regulation and crimes remain in effect.”

At least a few lawful concealed carriers took advantage of the brief period of relaxed gun laws to take uneventful armed strolls around notable monuments in the district before the pendulum swung in the other direction.

Washington D.C.’s Attorney General Irv Nathan on Monday asked that the federal court issue a stay for at least 180 days so the D.C. Council could “obtain public input and enact a compliant licensing mechanism.” However, the motion further stated that the district did not oppose a shorter 90-day stay, which both sides agreed to and Scullin signed, requiring the district to respond by Oct. 22. With the D.C. Council on recess until Sept. 15, this allows lawmakers just five weeks to hammer out a new gun law for the area’s 650,000 inhabitants.

Already council members, some of whom are distributing ‘Gun Free DC’ signs are calling for the district’s stand on guns outside the home to be more strict than anywhere else in the country, for a specific reason.

“Because of the District’s unique national security concerns, the right to carry a firearm in public must be restricted more heavily than any place else in the nation,” reads a statement from D.C. Council Chairman Phil Mendelson. “Four U.S. presidents have been assassinated by gunfire, and at least five others have been shot at, including Ronald Reagan who was seriously wounded in 1981. Neither the Secret Service nor the Capitol Police will disclose all incidents where they have recovered firearms, but we do know that just two years ago someone hit the White House with gunfire, and there are frequent threats on the foreign diplomatic corps.”

To these assertions, lawyers for the plaintiffs in the Palmer case are crying foul.

“That’s a silly argument,” Palmer attorney and noted Second Amendment scholar Alan Gura told NPR. “The fact of the matter is that every city in America has important installations, foreign consulates, the President; members of Congress visit every state in the union. And the gun laws don’t change when important people are in town. You know who else is important are the people who live and work in Washington, D.C. And they’re important enough to be able to deserve to enjoy their constitutional rights.”

Nevertheless, for now at least, carry outside the home in the nation’s capital is still prohibited.