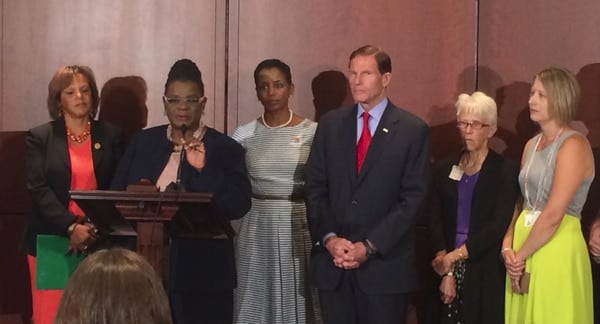 The bill, introduced into the Senate, would grant incentives to states that match or exceed current federal domestic violence gun prohibitions and enforce regulations by seizing guns when responding to domestic violence situations. The measure is inspired by the case of Lori Jackson, a 32-year-old Connecticut woman who was shot and killed this year by her estranged husband. Jackson’s husband was subject to a temporary restraining order at the time.

“When domestic abusers are most dangerous – at the height of their rage – current law is weakest in protecting victims like Lori Jackson from gun violence,” said Sen. Richard Blumenthal (D-CT), a sponsor of the measure, in a statement Tuesday. “When a survivor makes the brave decision to leave his or her abuser and seek help from law enforcement and our courts, our system must do everything possible to protect their safety and the safety of their children. This legislation provides the resources necessary to protect survivors of domestic abuse and remove guns from dangerous situations where lives are literally on the line.”

The bill, termed the Domestic Violence Gun Homicide Prevention Act of 2014, is cosponsored by Sens. Murphy, Schatz, Gillibrand, Kaine, Levin, Durbin, and Warren, all Senate Dems with a long history of supporting pro-gun control measures. The legislation would institute and fund a series of grants, administered by the Director of the Office of Community Policing Services of the Department of Justice. These grants would be distributed to states who have domestic violence gun prohibitions and enforce regulations that include the seizure of firearms in cases of domestic abuse.

The announcement of the legislation comes just a day before a scheduled appearance on Capitol Hill by a group of domestic violence survivors and gun control advocates from Michael Bloomberg’s Everytown for Gun Safety. These speakers will testify in front of the Senate Judiciary Committee on the subject of closing what they term “loopholes in federal law that allow dangerous abusers and stalkers to buy and keep guns.”

Two of the co-sponsors of the bill unveiled Tuesday, Blumenthal and Durbin, sit on the Senate Judiciary Committee.

Everytown has been vocal in recent months on the subject of gun control and domestic violence. In June, the group released a 36-page study in which they contend that some 41 states do not require domestic abusers to relinquish guns and federal law does not keep guns out of the hands of abusive dating partners or convicted stalkers. The study further states that when a gun is present in a violence situation, it increases the risk of homicide for women by 500 percent.

This week Everytown launched a series of graphic ads on cable and network stations to air in Washington, D.C., New Hampshire, Arizona and Nevada. In the 30-second spots, a woman is confronted by what is portrayed as an armed, estranged ex who breaks into her home despite calls to 911 for help. These ads, aimed directly at three Republican senators — including one on the Senate Judiciary Committee — publicly challenge the lawmakers to help expand current laws to prohibit gun possession by domestic abusers.

The National Rifle Association, denounced these new ads, saying, “All of this could have been prevented if the woman had a firearm in her possession as soon as she saw her ex-husband pounding on the door,” in a release Tuesday from their Institute for Legislative Action.