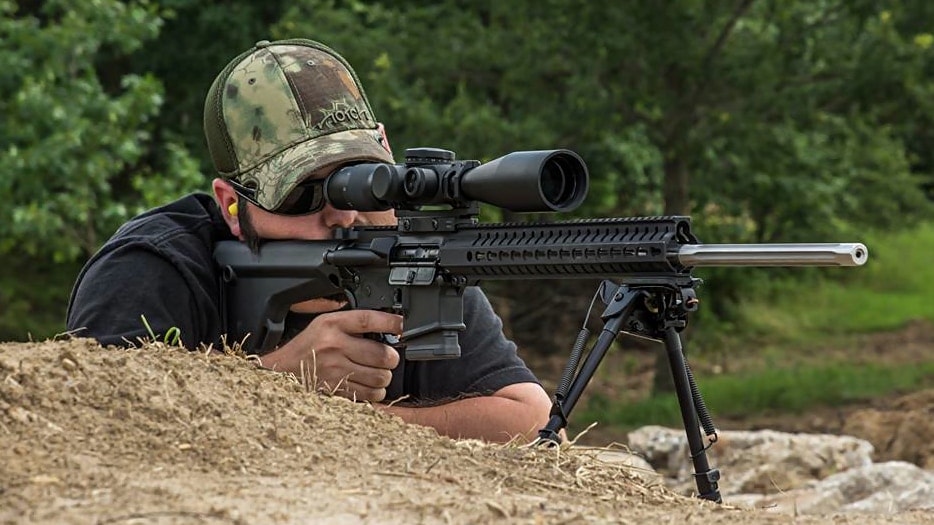 CMMG is adding a new series of varminting rifles to their catalog, the Mk4 V rifles chambered for 5.56 NATO/.223 Remington. The AR-15-pattern rifles stand out from the pack with their extended, fluted barrels and strong feature set.

There are currently two rifles in the series, the model V and V2. The V is the base model with standard military-style furniture and the V2 is an upgraded rifle with Magpul accessories and a Geissele trigger.

At the core of CMMG’s V-series rifles is a uncommonly long 24-inch fluted 416 stainless steel barrel to take advantage of every last grain of powder. The barrel has a 1-in-8 twist for use with lighter bullets without losing the ability to shoot heavier loads as well.

Fluted barrels have two major benefits over standard barrels. The cutouts help cut weight without sacrificing rigidity and the increased surface area helps keep things running cool, two things that promote accuracy on the first shot and every shot after that. The barrel also has a recessed target crown.

To make sure shooters get the most out of their barrels the Mk4 Vs are equipped with free-floating hanguards. CMMG’s RKM14 handguard is a slim, lightweight design with a flattop Picatinny rail and KeyMod slots along the 3-, 6- and 9-o’clock positions. The upper receiver also has a standard flattop rail for use with scopes.

The handguard was designed to offer a comfortable grip without having to turn to panels, and a grip that’s easy to wrap a hand around, too. CMMG offers 5-slot accessory rails for people who want to use Picatinny accessories with the KeyMod slots.

Like other Mk4 rifles the V models are built on MIL-SPEC 7075-T6 hard-anodized aluminum receivers and even with the long barrel weigh just 7.5 pounds. They are “optics ready” leaving scope selection up to the end user.

Both models measure in at 41.5 inches long with their fixed A1 and MOE buttstocks. The standard Mk4 V has an MSRP of $1,249 and the V2 model with the Magpul furniture and Geissele Automatics SSA two-stage trigger runs a little more at $1,499. Both come with one 30-round PMag where available.

Real-world pricing is usually a couple hundred less and we expect the same for the V series. If you’re looking for a rifle to deal with a pest population or just want to put small holes in paper a long way away, you might want to put the new CMMG V-series on your list.

Every CMMG rifle comes with a lifetime guarantee. For details and specifications head over to the Mk4 V and V2 product pages, and for up-to-the-minute news on CMMG head over to their Facebook page.