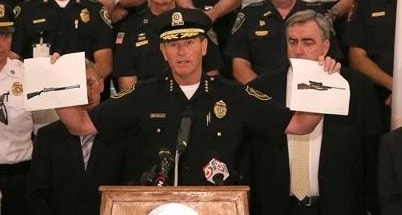 Police chiefs in Massachusetts may have the right to challenge  firearms identification (FID) card applications in court after state lawmakers struck a deal on a controversial gun bill Wednesday.

The original house bill contained a clause that would allow local police chiefs to deny FID cards, which are needed to purchase long arms such as rifles and shotguns. While it passed that body on July 9, the measure only made it through the state senate once the proposed increased police powers were removed. Now a group of legislators from both bodies has worked out a compromise that would only allow chiefs to petition a local court to disallow a FID application after showing cause, rather than having the authority to make arbitrary may-issue decisions.

Under the new guidelines, Massachusetts police chiefs who desire to deny or revoke a FID license for a shotgun or rifle would have to petition the court system with a written notice as to the reason for the requested denial. The court, in turn must find that the chief has “reliable, articulable, and credible information” that the applicant “could potentially create a risk to public safety” before granting such a request.

“Are people really going to be any less dead if they’re killed with a rifle or a shotgun than a handgun?” said Police Chief Terry Cunningham of Wellesley at a press conference last week. Gov. Deval Patrick (D) has publicly stated that he supports the chiefs in their quest for increased discretionary powers.

Chiefs in the state had been very vocal in calling for increased powers to turn down applicants since the senate version of the bill passed without that ability in its language.

They currently only have such discretion in handgun permits.

As such, under the Bay State’s strict may-issue policies, just 251,000 “Class A” handgun permits are in circulation for a population of 6.6 million residents, according to a 2012 GAO report. By comparison, Indiana — which has roughly the same population but a more lax shall-issue handgun permitting scheme — had some 493,205 concealed carry permits in circulation, according to figures from Indiana State Police.

The compromise bill now heads for a final vote before the legislative session is scheduled to end Thursday.