Musings of a retired Navy man on ship defense 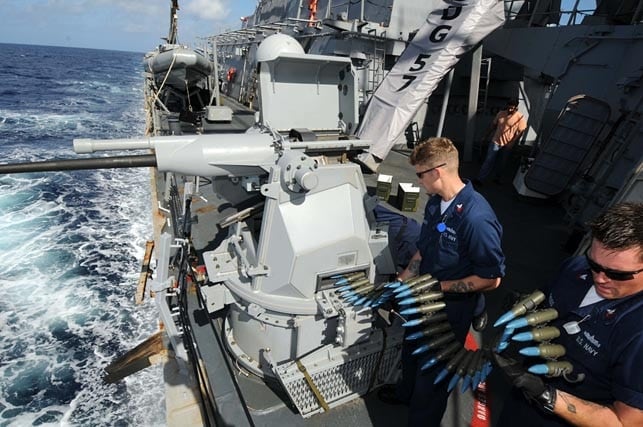 Imagine trying to board any ship when this thing opens up on you. (Photo Credit: Wikipedia.org)

Out at sea you have plenty of time to think. Working a security assignment aboard a ship will have various scenarios running through your mind. Do I have the proper weapon if the ship is  boarded? What should I use for cover? What hallway should I secure first?

For several years I was stationed on an aircraft carrier and assigned to the Security Department when we were in port. Attacking or defending a ship out at sea or moored at the pier presents a number of unique, significant challenges to both attackers and defenders. These are my opinions, thoughts and musings on what can turn the tide in naval combat.

A maritime environment brings with it one massive problem: sea salt. Sea salt can and will get everywhere if it gets the chance. Constant exposure to sea salt means that a ship’s greatest enemy is rust. Even docked, the ship is still exposed to sea salt. Constant maintenance is needed to prevent corrosion onboard a ship.

Pier side, the vast majority of large ships are crowded and surrounded by other ships, vehicles, cranes, storage containers, concrete barriers and fences, all arranged in a seemingly haphazard, yet organized fashion. The harbor itself can be a myriad of vessels, both large and small anchored out farther in the bay or sailing in, around and out of the bay.

There is always a maritime security presence in small patrol boats manned by local police or military forces in addition to those present in the direct vicinity, but I’ll leave the details vague for the sake of operations security (OPSEC).

Inside the shipyard, numerous buildings of all shapes and sizes provide support to the ships moored there. These can be machine shops, living quarters, dining facilities, storage areas, warehouses, hazardous material distribution centers, fuel storage, ordnance storage, fire and security facilities and administration buildings. The layout of which, can cause confusion to unfamiliar and unfriendly visitors. 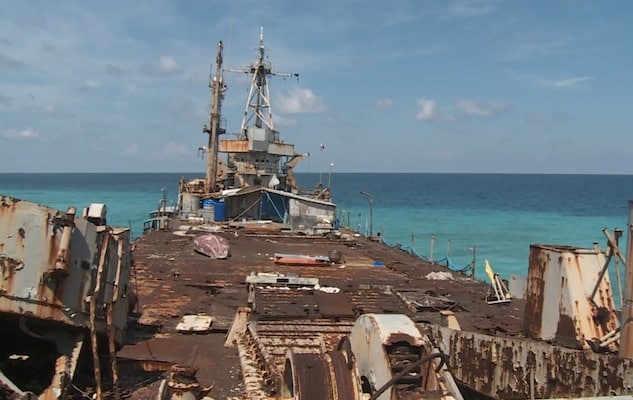 Rust is the enemy of metal (Photo Credit: CNN)

The ship itself is also very perplexing to the uninitiated. Ask any Navy or ex-Navy sailor and he’ll tell you about how he was lost when he first arrived on his ship. Increasing vessel size amplifies the issue, such as aircraft carriers or amphibious assault ships. The newer San Antonio class LPDs are also designed with ship security in mind and deliberately made the interior layout confusing. Having served onboard an aircraft carrier, I can tell you that some passageways appear to lead no where and others are seemingly placed with little common sense.

Outside on the weatherdecks, there are various items strewn about the decks which could provide cover and concealment, yet impede movement to those unfamiliar with the ship’s layout. I can only imagine what the interior of larger commercial container ships are like and how to move around the weatherdecks of those ships. Interestingly enough, the placement of these items is almost never recorded, so defenders will always have a home-turn advantage when defending.

To add to the hazards of a shipboard environment are the numerous electrical boxes all over the passageways and the large numbers of exposed cables in the overheads. There are also what are termed “knee-knockers”, which can trip up unsuspecting individuals. If I didn’t know any better, I’d swear the Navy hired Viet Cong saboteurs to place these damn things.

For both pierside and aboard the ship, the environment is both confusing and hazardous. Therefore, the advantage always goes to the defenders, but where there is a will, there is a way and a determined attacker can overcome these obstacles, though it would be a costly battle. 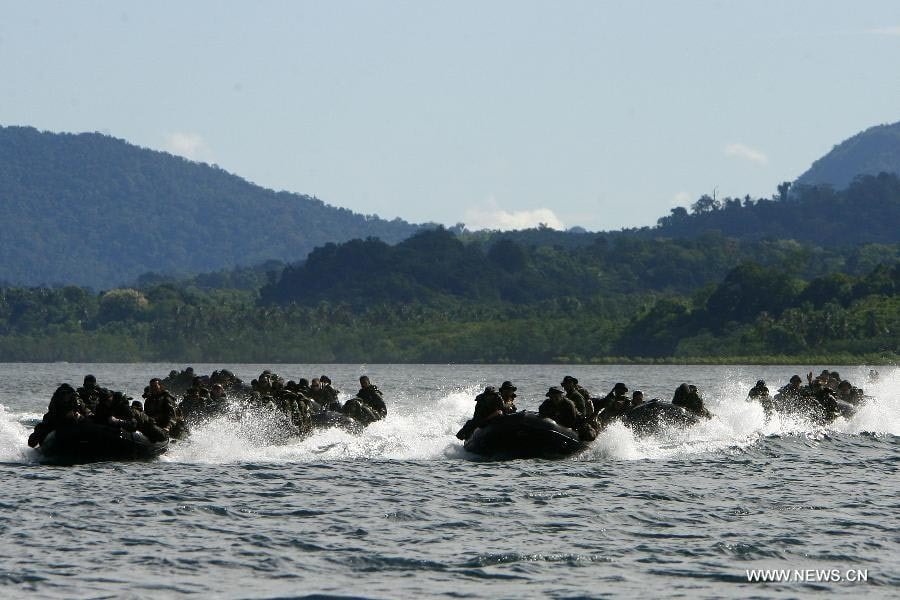 Even the SEALs wouldn’t stand a chance against a fully-prepared vessel with numerical superiority (Photo Credit: News.cn)

One of the oldest rules of warfare is the rule of numerical superiority in an invasion. The traditional rule of thinking stated that in order to have a chance of success, an invading force must enjoy a three-to-one advantage over the defender.

When attacking a ship or shipyard, several factors must be factored in. Most importantly, whether or not the shipyard is an active military installation or home to a military presence of some sort. The defender, in theory, enjoys some defense-in-depth.

Although the attacker might fight his way through the gates, we must assume that the rest of the security force in the area has been alerted and will attempt to stop or at least slow the attacking force. Even if the attacker has studied maps of the area, the defender will hopefully have a greater knowledge of the area, providing them an expedited route to halt or harass the attacker.

Additionally, when it comes to clearing spaces on board ships and moving around in a dangerous situation, teamwork is of the utmost importance. Teamwork and moving as one must be drilled into those who will respond to any situation. They must practice often enough that they can perform room clearing maneuvers in their sleep. They need to be proficient with their weapons, because as Bill Jordan once said: “Be first or be dead … there is no second place winner in a gun fight!” In such close quarters, reactions must be instant.

The advantage goes to the side who has the greater numbers and the best teamwork. 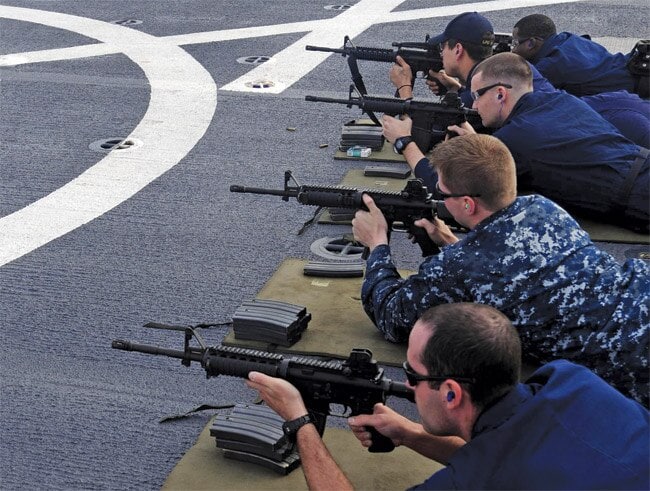 For keeping attackers, such as small boats, away from the ship, machineguns and rifles will do the job. Machineguns chambered in .50 BMG and 7.62x51mm are standard issue for US Navy ships and the exterior of some ships are lined with mounts for them. If there are no mounts, then it is easy enough to place them on the deck and go from there. Obviously rifles have been used for defense since the age of sail and a 7.62x51mm or 5.56mm rifle can do the job just fine. The US Navy issues both M14s and M16s for ship security while the Chinese navy utilizes AKM variants and Type 95 assault rifles and LMGs . While larger caliber naval guns would also do the job, some might find it overkill, to use such a weapon against a small boat. Also larger ships such as aircraft carriers lack these. Though, in a pinch, a high-pressure fire hose spewing water can also do damage.

The interior of the ship is lined with “false bulkheads”. Unlike regular bulkheads which are incredibly thick steel, false bulkheads are usually thin gauge steel. The thinness

of the steel, along with the restriction to FMJ rounds for military, makes rifles a no-go for the interiors of the ship. There would be too much of a chance of over-penetration for even a 5.56mm round. With the crowded conditions onboard a vessel, this can be very bad. Which also raises the concern for echo and

For fighting inside of a ship, it would be best to carry handguns and sub-machine guns. While the risk of over penetration won’t go away entirely, I believe that a slower, heavier .45 ACP bullet is less likely to over-penetrate than a faster 9mm or .40 S&W or any rifle cartridge. 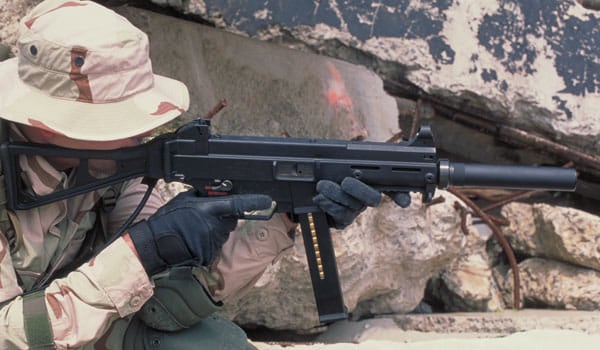 A civilian-manned vessel can still use expanding ammunition, and thus a wider variety of calibers, depending on the laws of the host country. However, I still wouldn’t recommend using rifles in the ship’s interior due to maneuverability issues that may arise.

As for shotguns, they are excellent and reliable weapons that can do plenty of damage, but also slow and cumbersome to reload at times. Men with a shotguns should be backed up by men with SMGs and/or handguns. Again, we want to avoid or mitigate the damage of over-penetration with the help of slower projectiles.

In the interior of the ship there will most likely be a meeting engagement where both sides run into each other and the side that can bring forth the greatest amount of firepower will have the advantage.

Regardless of the weapons used, it is imperative that they are well maintained and lubricated due to sea salt. Finishes such as parkerization, stainless and nickel-plated can help in fighting corrosion, but it will be up to the maintainers to make sure that the weapons don’t rust. 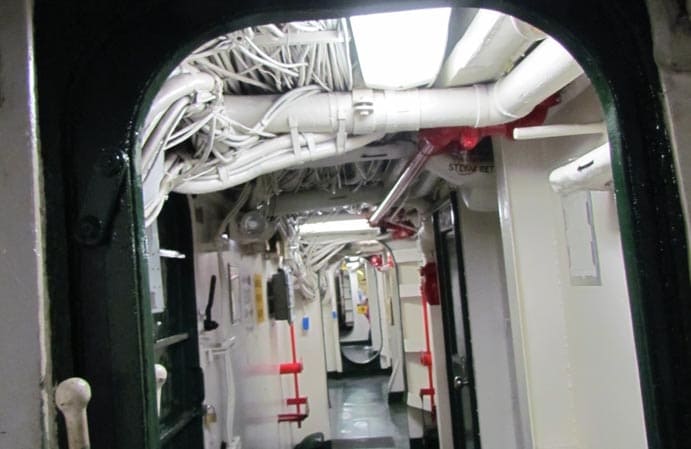 Scenario –  Fighting inside a ship

Fighting inside a ship would be claustrophobic and violent; the cramped interior of the ship prevents anything resembling a long range fire fight. The confusing innards would make it hard for an attacker to move quickly, giving further advantage to the defenders. The defenders can also make use of the numerous opportunities for cover and concealment, using whatever they can find for concealment, cover and ambushes. A Scenario not unlike the door-to-door fighting of Stalingrad in the second World War. Heavy doors can be locked to deny entry to passageways and spaces to slow or trap the attackers. However this can work both ways and may also slow down unprepared defenders.

If the attacker possesses greater numbers, the defender still holds some advantages, such as an armed crew that is intimately familiar with the layout of the ship. Upon reaching the innards of the ship, the attacking force would be weakened and tired from having faced the defenses outside the ship. When the two sides inevitably run into each other, the winner of the engagements will boil down to firepower, rather than endurance; the confrontation will be brief and incredibly violent.

Unless the attacker is able to bring overwhelming numbers through size of the force or force multipliers along with professionalism, then to quote WOPR: “the only winning move is not to play.” Likewise it would be advantageous for the defender to defeat the attacker before they ever come onboard.

These are my thoughts that were formed on those long nights at sea, waiting for the next port visit or trouble call. Luckily for me, nothing ever happened, except for the occasional drunk sailor passed out in a passageway or the sailor needing assistance reaching Medical due to the local cuisine.