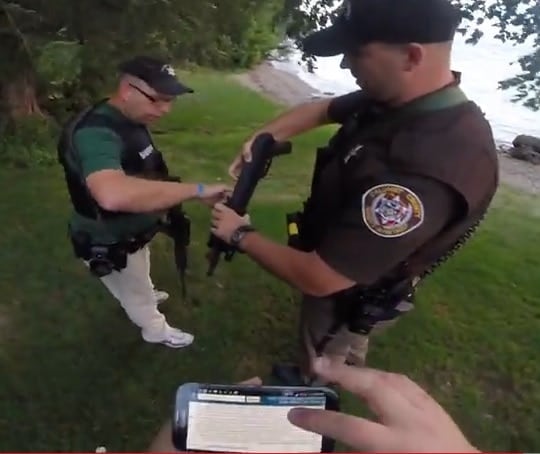 An open carry activist’s interaction with law enforcement in Calumet County, Wisconsin, could have brought about a correction in local laws, but not without having a deputy point a rifle at him first.

The incident occurred when William Polster went for a walk in the county park near Lake Winnebago over the weekend. While Polster maintained he had every legal right under state law to have firearms, which he openly carried, responding Calumet County sheriff’s deputies did not agree.

In fact, while making initial contact with Polster, one of the lawmen covered the gun rights advocate with what appears to be an AR-style patrol rifle.

“If an individual is carrying a firearm, it’s not unlikely that we’re not going to draw our firearm in preparation,” Calumet County Sheriff’s Office Chief Deputy Brett Bowe told Fox 11. “He had a sidearm, but he also had a weapon slung across his back, dressed in black.”

While Polster responded at first with salty language to officers, he then surrendered his firearms to the deputies briefly for inspection before turning the topic of conversation to his belief that state laws on allowing guns in parks preempts the local county ordinance prohibiting them.

After looking further into the subject, Calumet county officials have promised to change the ordinance to comply with the state’s laws, which changed 11 years ago. In the meantime, the sheriff’s office will not enforce the ban.

This is the latest incident of open carriers being stopped while legally armed in public areas. Last December, a Colorado man was awarded a $23,500 settlement following his wrongful arrest while carrying in a city park. Arresting officers claimed that the man was in violation of the law, but it turned out that the law they were referring to had been repealed nearly a decade prior.

Further cases of similar settlements have occurred in Washington and Wisconsin in the past two years.

“I want to point out to the people saying open carry hurts our rights that this is an example where open carry, standing firm and putting pressure on the local law enforcement and DA restored our rights,” said Polster, who has posted the full video of his encounter online. He also wanted to thank the Wisconsin Department of Justice and state Attorney General J.B. Van Hollen for their help in clearing up questions about the laws in question with Calumet county officials.

Open carry advocates will hold a rally at the park on Monday, the same day the county will decide whether or not it will continue to enforce the ordinance.