Rapper Rick Ross and owner of 25 Wingstop franchises, peppered mostly throughout the gun-loving South, said that he doesn’t believe guns have a place in his restaurants – or any other eating establishment — to the Huffington Post, in an interview about his business ventures.

Ross, with an estimated net worth of $25 million to $35 million, has essentially made himself rich, in part, by performing music about thug life and has also cashed in on other aspects of the lifestyle with business endeavors in all that encompass it, including champagne and e-Cigarette creations.

“The art, the music, the clothes we wear, the things we drive, the things we discuss is all a part of a lifestyle,” Ross said. “I feel what we drink, what we eat, all falls in that category.”

And the 38-year-old rapper, whose real name is William Leonard Roberts II, is happy to bring his image to the Wingstop franchise. 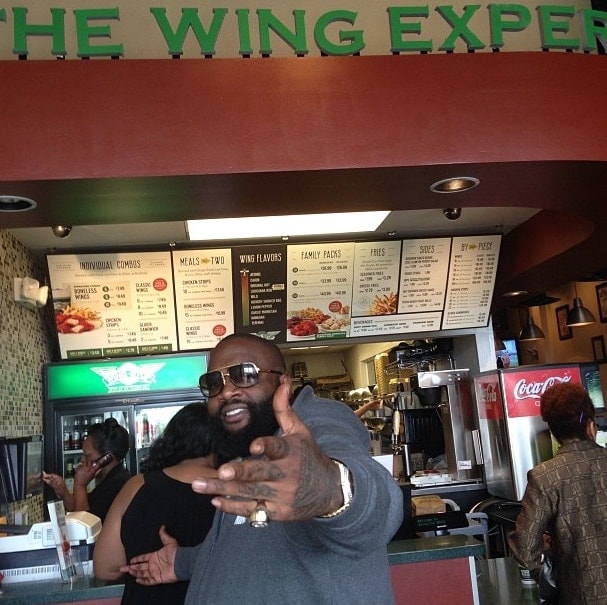 Rick Ross hustlin‘ at one of his Wingstop restaurants. (Photo credit: Instagram)

Ross, who said he supports the Second Amendment, was found carrying a 9mm handgun last March after he wrecked his car while trying to get away from drive-by shooters. He and his wife were ambushed while cruising down a Florida street in his Rolls Royce.

“I support the right to bear arms, I do,” he said in the interview. “I’m a licensed carrier.”

But he believes there are some places where weapons just aren’t suitable.

“When I go into public places, when I go out and I enter certain places, I believe it’s best to leave your firearm in your vehicle,” he said. “Go in and enjoy your meal.”

Of course, it’s not a Wingstop policy or a ban on guns per se, it’s just Ross’ personal opinion, which he admits everyone is entitled to their own.

“That’s their personal choice, and that’s depending on the laws — that’s in Texas,” he said with a laugh. “But, me personally, I believe bringing a rifle into any closed building is too much.”