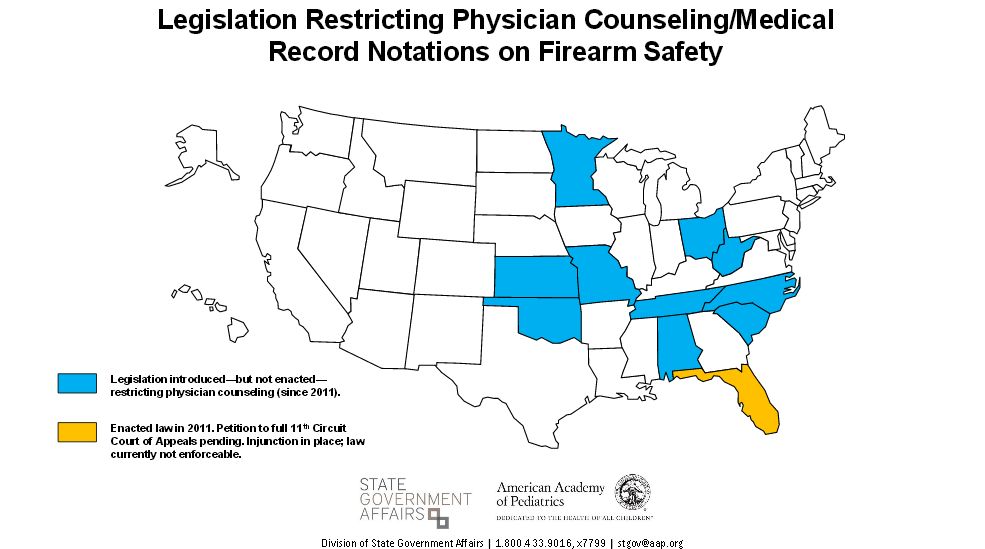 According to the American Academy of Pediatrics, 11 states have attempted legislation to restrict physician counseling about firearms in recent years. (Photo credit AAP)

A group of physicians represented by the Brady Center to Prevent Gun Violence plans to appeal the ruling of a federal appeals court that upholds Florida’s prohibition law on asking patients about guns.

The suit, Wollschlaeger v. Governor of the State of Florida, better known as the “Docs vs. Glocks” case, was a challenge to Florida’s 2011 Firearm Owners’ Privacy Act that discouraged health care workers from asking patients questions about firearms that were not directly relevant to medical care or safety. On July 25, a panel of judges from the U.S. Court of Appeals for the Eleventh Circuit in a 2-1 decision found that Florida’s law was “valid regulation of professional conduct that has only incidental effect on physicians’ speech.”

This did not sit well with the Brady group who within days advised they would ask for en banc review by the full court of the panel’s finding.

“If the appellate court’s decision is allowed to stand, the corporate gun lobby and its political cronies will be given license to silence the medical community from speaking the truth to patients about the real risks of guns in the home, and any powerful industry will be able to dictate whether families get complete, honest information about the dangers posed by its products,” said Jonathan Lowy, Director, Legal Action Project, Brady Center to Prevent Gun Violence in a statement released this week.

This sentiment was echoed by the American Medical Association and American Academy of Pediatrics who maintain that Florida’s law infringes on a physician’s free speech and forces them to abandon ethical obligations under penalty of law. Besides Florida, at least ten other states have attempted similar legislation to restrict physician counseling about firearms in recent years, according to the AAP.

In addition to the doctors’ associations and the Brady organization, other gun control groups were even more vehement with their displeasure in the court’s ruling. The National Gun Victims Action Council even went so far as to name U.S. Circuit Judge Gerald Tjoflat, who penned the majority’s decision, as the “NRA Puppet of the Week.”

However, Second Amendment advocates are calling the quick response from the gun control and medical groups a smoke screen.

“Physicians who genuinely wish to offer safety information can simply hand out firearms safety and safe-storage brochures to all patients,” wrote Marion Hammer, president of the Unified Sportsmen of Florida and past president of the National Rifle Association in an op-ed published this week in the Tallahassee Democrat. Hammer, quoting passages directly from the AAP and AMA’s websites, maintains that the groups are pushing a political agenda to ban guns.

“Interrogating parents and children about what they own or have in the home is not only an intrusion but is a violation of privacy rights,” continued Hammer. “Parents do not take their children to physicians for a political lecture against the ownership of firearms; they go there for medical care.”

En banc review, which would require a rehearing of the case in front of the full appellate circuit, requires that a majority of judges grant the petition for review. As such, they are rarely granted. According to a study conducted by the Fordham Law Review, in 2010 U.S. circuit courts heard just 45 cases en banc out of more than 30,914 that had terminated.