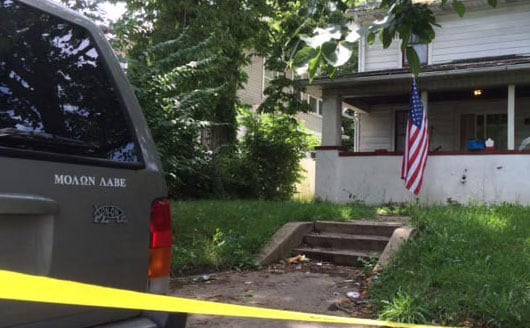 A teenage boy is dead after he broke into an Indianapolis home Sunday afternoon and was shot by the homeowner.

Police responded to several calls about shots being fired in the area around 1 p.m. and discovered 17-year-old Brandon Ford dead from an apparent gunshot wound. According to the homeowner, 27-year-old Joshua Black, he and several others were at the home when the three suspects broke into his house. Gunfire erupted between Black and the suspects, during which Ford was fatally shot.

“I heard about four or five shots,” one neighbor said. “Unfortunately, that’s not uncommon, so my first instinct was to lay on the floor.”

One report indicates that the two remaining suspects were already making off with a handgun and two TVs before Black discovered they were there. A .223-caliber tactical rifle, believed to be the gun used by Black, was removed from the home by authorities during the investigation.

Neighbors told reporters that this wasn’t the first time Black’s home had been targeted for a break-in either. Black, who is a member of the Indiana National Guard, reported another burglary on Christmas Eve last year. Among the items stolen were several guns, a set of U.S. Army issue body armor and multiple electronics devices.

Area residents say crime – and gunshots – are a common occurrence.

“We hear gunshots on and off throughout the year,” said another neighbor, “but this is the closest it has ever been.”

Following the break-in and subsequent shooting, residents gathered in front of the victim’s home to mourn and pray over the senseless violence as police encompassed the area.

“The young kids today, if you don’t have an education, you need to go back to school or get a GED, so you can get a good paying job that’s paying good money to have in your pocket,” said Shirly Duma, who lives nearby. “You know, I’m a little frightened right now. It’s too close to home.”

Friends and family members of Ford said he was a good kid, but had “drifted away” down a dangerous path in recent years. Ford had been involved in the Indianapolis branch of Young Men, Inc., a program which focuses on helping youth stay away from crime, make good choices and choose positive paths. However, the program’s director, Reverand Malachi Walker, told reporters that Ford had not been around for a few years now. Walker hopes to use the incident as a warning to other youth about the dangers they face when they choose to become involved in criminal activity.

“It’s a shame that someone got killed. But if (the homeowner) didn’t have a gun, he might be the one who was killed,” said Dominic Wiliiams, who also lives nearby. “You got to do what you got to do to protect yourself.”

No charges are expected to be filed against Black at this time. Authorities are still searching for the remaining two suspects and although they had talked with a person of interest, no arrests have been made.