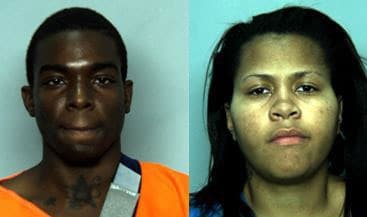 A clerk at a gas station in Chesapeake, Virginia, turned the tables on a would-be robber Monday night when he shot him twice, sending the suspect to the hospital and to jail.

The suspect walked into the Exxon at about 7:15 p.m. armed with a handgun and demanded money from the clerk, who initially thought the incident was some sort of prank and refused to open the cash drawer.

“He started shaking the gun at me telling me to give him the other till, which we don’t keep there anymore because we got robbed at the same store,” the clerk, Sammy Williams, told local media in a phone interview.

The same store had been robbed just last month in broad daylight. Following that robbery, a firearm was kept in the store. But the quick-thinking clerk, a former police officer, first had to figure out how to get to the gun without first being shot by the suspect.

“He got upset because there wasn’t another till, so he said ‘Give me that green bag over there,’” Williams explained. “I said, ‘No that’s mine. It’s got my medicine it. I’m an older person, that’s my blood pressure medicine in it.’”

But unbeknownst to the suspect, the bag didn’t contain any medication.

Williams hit the silent alarm, then exchanged gunfire with the suspect. The clerk said he fired a total of six rounds in about two seconds.

“He was going to kill me.” Williams said. “I wasn’t trying to hit him in the leg or shoulder. I was hitting for the sweet spot basically, but my adrenaline is so high that my six rounds were all over the place.”

At the time, the clerk was unsure whether or not he had hit the suspect, who immediately ran off into a wooded area nearby. Williams chased after him, but ceased firing once he stepped outside.

“Some customers were coming into the parking lot, and I didn’t them want them to be in danger. That’s the last thing I want is for anything to happen to our customers,” Williams said.

Police searched the area for the suspect, but were unable to find anything. However, about 30 minutes later a man showed up at a nearby hospital with a gunshot wound. Police were called and identified the injured man as the suspect, 19-year-old Terry Graves.

Graves was arrested, along with 21-year-old Michelle Barber, who was identified as the getaway driver. Both being charged with robbery and use of a firearm in the commission of a felony.