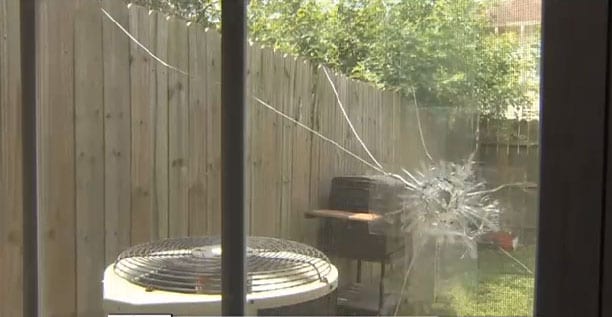 “There was agreement if there had been more than one bullet hole, had he sprayed the wall with bullets, bang, bang, bang, that would have been reckless,” one juror said. (Photo credit: NBC)

After battling authorities for more than a year, a Portsmouth, Virginia, man was handed a verdict of not guilty by a jury who determined that he did not, in fact, act recklessly when he fired a warning shot at officers who attempted to make forcible entry into his home, only to later discover that they had gone to the wrong house.

The incident, which happened last January, unfolded while Brandon Watson and his wife were watching late-night TV and heard noises coming from the back yard.

“She said, ‘Oh my gosh, someone is in the backyard,’” Watson told reporters. “The noises got closer and then she heard the clicking of the backdoor handle.”

At that point Watson ran to grab his gun, which was legally owned.

“We ran upstairs very quickly,” Watson recalled. “She saw guys in all black.”

Watson didn’t immediately call 911 because he couldn’t find his cell phone. However, he wasn’t about to let anyone come into his home and possibly harm his family either. So he ran back downstairs, gun in hand.

Watson called out into the darkness, saying, “Who is that? I have a gun.”

He received no response, but instead then saw a red laser aimed at his chest.

At the point, still not knowing who was trying to get into his home, Watson fired a warning shot through the window and ran across the street to seek help from his neighbor, a Virginia State Trooper.

Then things became even more confusing for Watson. As he ran out of his house he was confronted by authorities who told him to drop his weapon. He complied.

“They said, ‘We just got news you shot at an officer.’ I said, ‘An officer? Nobody came to my door. What do you mean an officer? I didn’t know there were any officers in my backyard,’” he said.

According to Watson, the cops never announced who they were or why they were there. And the officers, responding to a call from Watson’s neighbor about a possible break-in, had apparently gone to the wrong house.

“When they went around from the front, they started counting 2, 3, 4. They were counting the number of townhouse units from the end, where Patricia Brooks lived. Then they see a gate that is open, and that raises suspicion that must be the house,” explained Portsmouth Commonwealth’s attorney Earle Mobley.

“You cannot fire indiscriminately through the window,” Mobley said.

The judge found Watson guilty, but the matter was far from resolved. Watson appealed the decision and a mistrial was declared by the second judge. Watson then requested a jury trial.

“This can’t be doing your job. You come in my backyard, try to open my door, open my window and flash red laser beams on my chest because you thought I was the burglar, and I thought you were the burglar,” Watson said.

And apparently the jury, who deliberated for a total of 47 minutes, agreed.

In fact, the jury felt Watson actually showed restraint by only firing a single warning shot.

“The Commonwealth really didn’t have a case. It wasn’t reckless, so it didn’t’ take a lot of discussion,” juror Danny Barnes said.

What the jury did find questionable was the fact that the police went to the wrong house. Jurors also doubted some details provide by the cops.

“The police kept saying they had their weapons pointed at the ground at all times. At the same time, they said they were using their TAC lights on the gun to illuminate whatever they were looking at,” Barnes said. “You can’t be doing both at the same time, that’s contradictory.”

The police department has since changed their policy and removed the lasers from their duty weapons.

Although the jury found Watson not guilty, Barnes admits the man’s troubles are far from over.

“He was put in a no-win situation,” Barnes said of Watson, who has now been unemployed for 10 months.

“I begged them not to charge me. I knew what it meant,” said Watson, who now plans to file a suit against the city. “I got no jobs. No one would hire me after they ran the criminal background check, because I was charged with reckless handling of a firearm.”