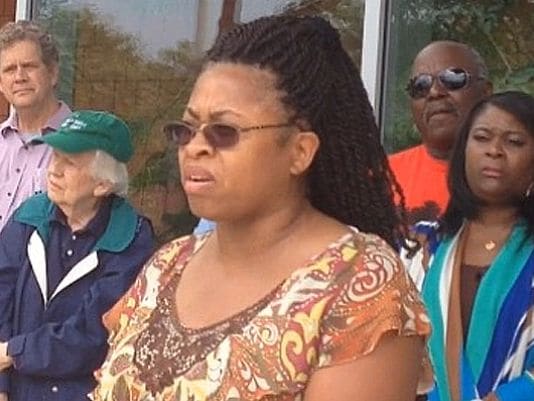 The educator was escorting an excursion to Gotham by ten Rochester STEM High School students, when she was taken into custody at the entrance to the Statue of Liberty on May 31 after security personnel found a .38 caliber revolver in her purse. While other teachers continued the trip with the students, Watkins was booked on charges of second degree criminal possession of a weapon, a felony that carries up to 15 years in prison.

According to WHEC Rochester, the 46-year-old teacher and Army veteran has held a pistol permit from Monroe County, where she lives, and was unaware the license was not honored in the city, still in the same state.

When Rochester School District officials discovered the charges nearly two months later, administrators sent a letter to parents of students in the city. In the letter, which was obtained by the Rochester Democrat & Chronicle, the district maintains that students were not in danger and Watkins’ supervisors were unaware of the charges for some time.

“Principal Denaro has called all of the parents of students who attended this field trip,” reads an Aug. 1 letter sent by Bolen Vagas, Rochester’s superintendent of schools. “We have instructed Ms. Watkins not to contact students over the summer, as the District investigates this matter internally. She will not be returning to STEM High School when school resumes and will not be working with students until this matter is resolved.”

A search of the school’s website would seem to indicate that Watkins’ profile has been deleted from the teacher directory.

The National Park Services, which maintains the Statue of Liberty, has since 2010 allowed firearms inside many areas provided the gun owner is carrying legally for the city or state . As noted on the park’s website, “The role of the responsible gun owner is to know and obey the federal, state, and local laws appropriate to the park they are visiting.”

The pitfalls in the case of the educator packing heat in New York City, still in the same state as Watkins’ permit are common enough to be noted by the issuing agency who granted her license.

According to the Monroe County Sheriff’s Office application for a pistol permit and literature on firearms safety, “A pistol permit issued by an upstate county is valid in any county in New York except New York City.”

In fact, New York’s rates of legal gun ownership are so low that the recent release of cable film Sharknado 2, in which swarms of vicious sharks drop from the sky into the five boroughs, brought immediate tweets lampooning gun control.

This is not the first time that seemingly well-meaning concealed carry holders have found themselves under threat of imprisonment by being armed and away from home. Last month a 27-year-old single mother of two found out the hard way that her Pennsylvania permit was not honored in neighboring New Jersey where she is now facing a minimum of three years in jail for unlawful possession of a weapon and possession of hollow-point bullets.

While legislation of its kind is still in its infancy, Watkins is currently out on bond and is awaiting her court date in New York.