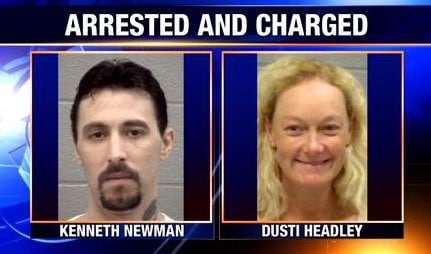 It’s unknown what the men were fighting about, but apparently, the woman felt the need to jump in. (Photo: ABC)

An assault on a man by two people in Columbia County, Georgia, over the weekend ended with one of the suspects getting shot after the man’s teen son stepped in to protect him.

The Augusta Chronicle reports Kenneth Wayne Newman Jr. had threatened to kill Richard Green when he showed up at his home about 2:30 a.m. After punching him multiple times, Newman then began choking Green.

Green’s 15-year-old son, Evan, who is also Newman’s nephew, grabbed a .22-caliber rifle and demanded Newman to stop. When Newman refused to release the teen’s father despite several warnings, Evan fired a single shot at Newman, striking him in the back about 6 inches below his neck.

When deputies arrived on the scene, they found Newman lying on the floor suffering from a gunshot wound. He was transported to a local hospital where his current condition is unknown.

Police say there were at least five other people in Green’s home during the incident, and at least one other individual, Dusti Headley, was involved in the assault on Green.

Headley now faces charges for giving false statements, as well as two counts of battery. She is currently being held with a $13,300 bond. Charges are pending against Newman, who will be charged once released from the hospital.

Charges will not be filed against Evan Green, who acted in self-defense on behalf of his father. According to Georgia law, “A person is justified in using force which is intended or likely to cause death or great bodily harm only if he or she reasonably believes that such force is necessary to prevent death or great bodily injury to himself or herself or a third person.”

The state received attention recently for the Georgia Safe Carry Protection Act, dubbed the “guns everywhere act,” which went into affect July 1 and expanded the areas where firearms could lawfully be carried, including bars, churches, schools and government buildings.