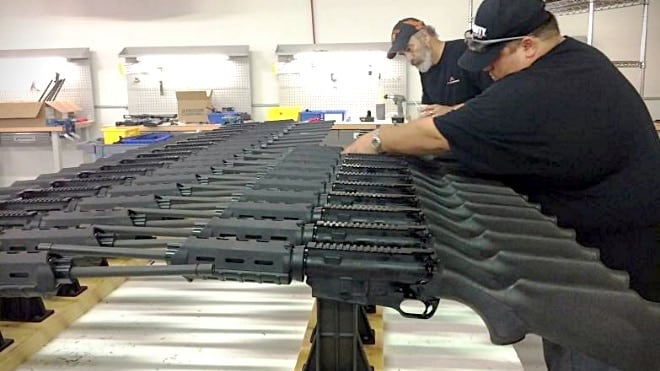 Ares Defense announced the exciting new SCR — the Sport Configurable Rifle, a “featureless” rifle that’s part AR-15 and part traditional hunting rifle — earlier this year to a welcoming audience. This gun is legal to own in all 50 states and is now shipping to dealers.

While the SCR wasn’t originally designed to skirt gun restrictions, it’s been tweaked with a custom barrel profile that has the look of a flash hider but is actually just a standard non-threaded muzzle.

The lower receiver, while compatible with AR-15 uppers, is a unique design. Similar to some semi-automatic shotgun designs, it has a canted recoil assembly and a hinged bolt carrier that recoils downward into the conventional rifle stock.

The first wave of SCRs will be sold with polymer furniture and Ares has stated that they’re working on wooden furniture for future rifles. They have developed three polymer buttstock styles, a standard straight stock, a Monte Carlo stock and a shortened sporter stock.

The rifles come with a Magpul MOE handguard as a fore-end and will be offered in carbine-length 16-inch barreled models as well as rifle-length 18-inch versions chambered for 5.56 NATO/.223 Remington and 7.62x39mm. 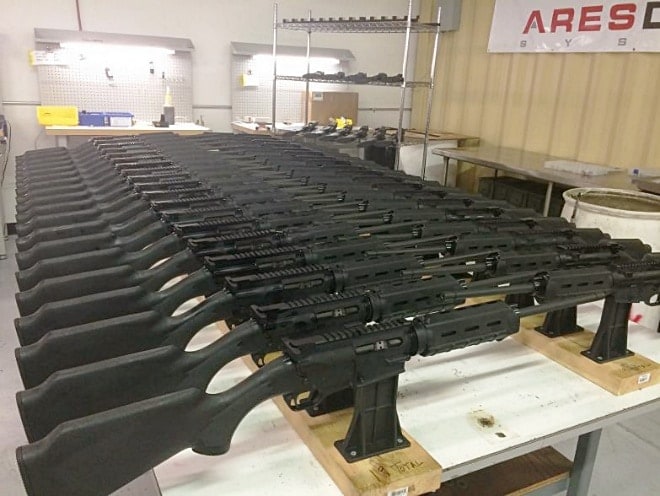 These are going to make a lot of shooters happy. (Photo credit: Ares/Facebook)

That’s just for starters. Ares has a lot planned for the SCR and will be following it with more models and fingers crossed, uppers and lowers sold separately.

Just the same the rifles are priced to move with an MSRP of just $865, meaning real-world prices are likely to be $700 or less, at least once the excitement dies down. With products like these, it’s not uncommon for demand to keep prices a little higher around launch.

You don’t have to live in a state that has limited gun access to like the SCR. The use of a the traditional stock has its benefits. Right off the bat it represents a solid weight savings. The SCR weighs just 5.7 pounds, putting it in the same territory as lightweight bolt guns. This is a rifle you can pack in just about anywhere, carry all day, and forget it’s there until you need it.

Chambered in 7.62x39mm it is a capable do-it-all rifle, especially when it comes to hunting as there are a lot of .30-caliber options in that cartridge for common and popular game. In 5.56 the SCR uses standard and plentiful AR-15 magazines. The SCR comes with a five-round magazines but accepts magazines of all capacities, including drums and coffin mags.

Another benefit of this system is the ability to mount many optics directly to the flattop receiver without having to size out a riser. The SCR does not come with iron sights and is intended to be used with red dot, reflex sights or scopes. With all the solid red dot options out there at the $100 price point electronic sights are in the same territory, or even cheaper than, many AR-15 sight sets today.

With the traditional stock layout this gun is perfect for bench shooting and brings with it all the advantages of being compatible with ultra-precise free-floating direct-impingement uppers to boot. You don’t have to live in a “ban” state to want one of these hot new guns from Ares Defense. This is just a straight-up interesting rifle, and we cannot wait to get behind one. For all the details and specifications head over to the Ares SCR product page.