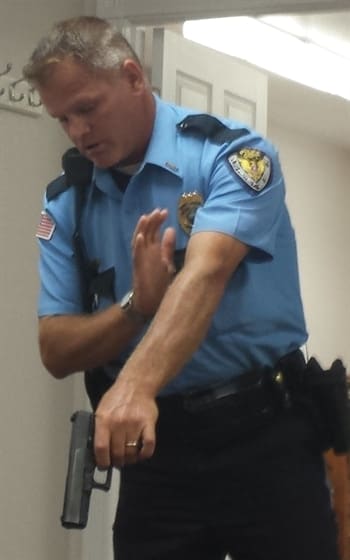 Chief Bob Lewis of the Blakesburg, Iowa police department is in trouble after pulling his service weapon out at least twice at city hall — once on a councilman.

The first occasion of the lawman slapping leather came in April where he drew his sidearm in an office area of the city building and pointed it at a door, behind which a councilman was standing. In the second, at last week’s council meeting where the first incident was brought up, the chief unholstered without warning to show that he did not carry a round in the chamber of his Glock. The two incidents, caught on camera, have some in the town of just under 300 worried.

“Oh yeah, it was stupid,” Blakesburg Mayor Jason Myers told WHO TV. “Whether or not he knew somebody was on the other side of the door, I mean, I feel that he probably did.”

According to surveillance tape from city hall in the April incident, Lewis is shown leaning against a window looking outside. Then, after a seated woman next to him touches his arm, the chief draws his pistol and points it at the door in front of him sideways before reholstering. City council member Larry Howe cannot be seen in the video behind the door. To this, the woman, identified as city council member Donna Thompson, is seen laughing.

In a report from the Ottumwa Evening Post, Lewis stated he was simply practicing what he would do if an emergency occurred. He went on to say that his holster sometimes sticks so he was practicing drawing the weapon.

When asked about the incident in last Wednesday’s council meeting, Lewis advised that he did not carry his gun with a round in the chamber. To demonstrate this, he unholstered once again, dropped his pistol’s loaded magazine, and racked the slide to show it was empty. This led to unease in the gallery of meeting attendees, one of whom recently had a relative accidentally shot by a gun that was thought to be unloaded at the time.

“He took the clip out and laid it on the bench there which I appreciate him doing that but there are some people that are very concerned about that,” said council member Bill Hinshaw. “Should it have been done? Probably that wasn’t the best thing to do.”

The mayor and city council are discussing possible disciplinary actions against Lewis over the weapon incidents in addition to allegations of personal use of his city vehicle.