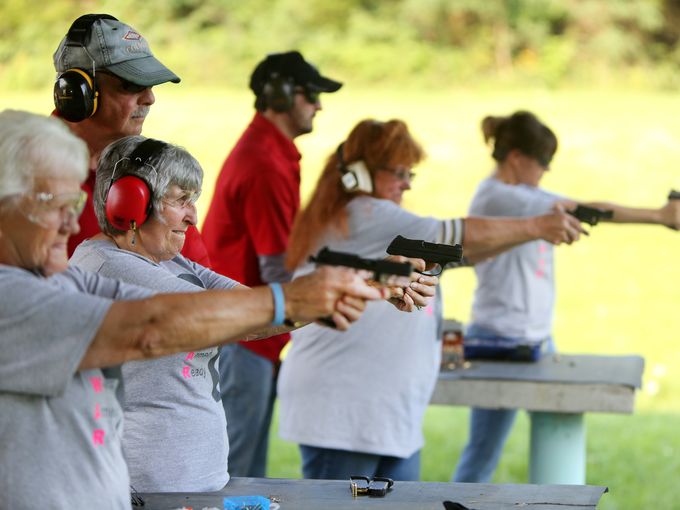 After separate brushes with the criminal element, two Ohio grandmothers in their 50’s founded a concealed carry group named “Women Armed and Ready” and promise to “never leave home without it.”

The group meets twice monthly and, according to their Facebook page, sponsors self-defense classes at local churches as well as female-oriented concealed carry certification classes at area shooting ranges. Founded in May, they have the blessing of area law enforcement and their membership is growing.

“My home was broken into a few years back. The business was hit by a couple guys after that. I got my concealed carry permit following the break-ins,” co-founder Konnie Couch , 52, told Eagle Country FM. She carries all the time now, saying, “It’s like American Express. I don’t leave home without it.”

Starting with Couch and her friend Robin Willoughby, 57, another robbery survivor in the small Ohio River town of Aurora, the group’s ranks have swelled now to over thirty members in just three months. They explained to Guns.com Tuesday that over coffee it was decided, “all the area women should learn these skills and be able to use them if the time ever came.”

As detailed by the Cincinnati Enquirer the group of concealed carry holders range in age from 50 to 81.

The spike in interest in gun ownership for women mirrors a nationwide trend. According to a 2012 report by the National Shooting Sports Foundation, the firearms industry trade association, 61 percent of firearm retailers surveyed said they say an increase in female customers in their stores.

The report also said that “participation by women increased in both target shooting (46.5 percent) and hunting (36.6 percent) in the last decade, according to the National Association of Sporting Goods Wholesalers.”

In response to this surge by female shooters, the National Rifle Association last year launched its NRA Women channel. Pushing this past the shooting sports and into personal defense, female NRA commentators such as Tatiana Whitlock have been releasing regular “Tips and Tactics” videos aimed at women.

In Ohio, where the number of concealed carry permits climbed by more than 50 percent last year, WAR is striking a chord with women both there and in other states.

“We are not going to become a statistic,” Couch and Willoughby explained to Guns.com. “We never thought that we would have such an overwhelming response. We only started in May. We have ladies all across this great nation asking for our help. So we are now in the process of expanding. The Lord has greatly blessed us and we thank Him for that.”