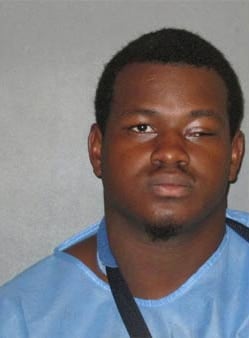 When questioned, Bem Sampson admitted to authorities that he was in the house stealing stuff. (Photo: East Baton Rouge Sheriff’s Office)

After discovering an uninvited guest in his daughter’s home early Wednesday morning, a Baton Rouge father opened fire on the man – a suspected burglar – striking him in the arm, sending him to the hospital and then off to jail.

Gerald Williams knew something wasn’t right when he drove past his daughter’s house and noticed the air conditioning unit was pushed out of the window, local media reports. There had been a rash of recent burglaries in the area and, knowing his daughter was on vacation, he wanted to check on the house.

Williams grabbed his .357 and entered the house through the back door using his key. Once inside, Williams was confronted by 19-year-old Bem Sampson. Williams told the police that Sampson “appeared to have something in his hands.” Not knowing who the man was or what was in his hands, Williams feared for his safety and opened fire, striking Sampson once in the arm. The intruder then jumped out of another window and ran down the street.

Seventeen-year-old Tyiesha Roseburr, who lives next door, heard the gunshots. “I thought somebody was shooting our house,” she said. “That’s how close it was.”

When officers arrived on the scene, they discovered Sampson about a block away, suffering from a gunshot wound. He was transported to a local hospital and, once released, was booked into jail. He faces a simple burglary charge.

Police aren’t sure whether Sampson had possession of a weapon while inside the house. However, a toy gun was found in the hallway where the confrontation between the intruder and the father took place.
No charges are expected to be filed against Williams, who will likely be protected under the state’s Castle Doctrine Law.

Another neighbor, who did not wish to be identified, told reporters that burglaries are commonplace in the neighborhood.

“My neighbor across the street, they just kicked her whole back door down,” the woman said.
But the woman also said that she’s prepared to defend herself and her home.

“Well, I tell you what,” she said. “If somebody comes in my house while I’m in there, I’m going to use a weapon. I’m not going to let them hurt me.”

And it’s a sentiment echoed by the way Williams felt when he came face to face with the intruder in his daughter’s home.

“It had to be me or him. So, it had to be him instead of me. I’m not going to get myself hurt in no kind of way,” he told reporters.