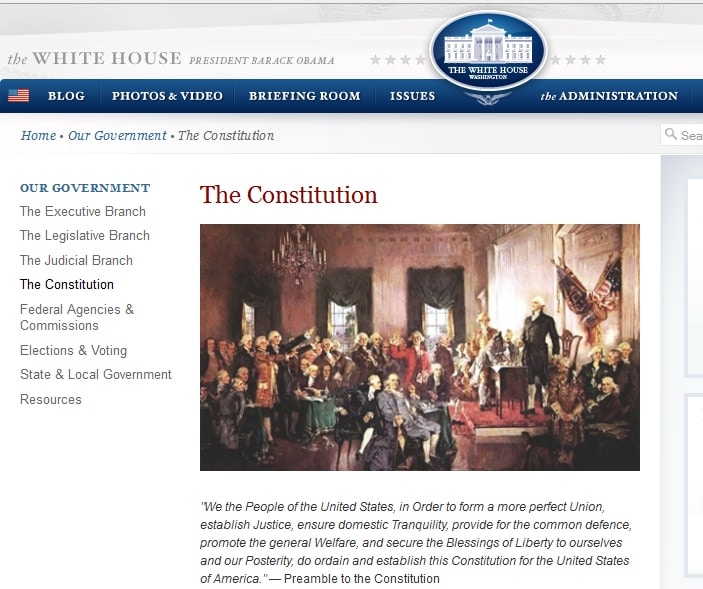 The White House’s webpage on the U.S. Constitution is under fire from gun rights advocates who take exception to the site’s description of the Second Amendment. (Photo: Whitehouse.gov)

Gun Owners of America posted an open letter to President Obama Tuesday to correct what they feel is a false description of the Second Amendment on the White House website.

The gun rights group, who claim to represent some 300,000 members and supporters, state that the abbreviated explanation on the government site is explicitly incorrect. As such, they are publicly bringing up the issue to the country’s chief executive.

The passage under fire, from the White House.gov page for the U.S. Constitution states that, “The Second Amendment gives citizens the right to bear arms.”

“Even recognizing that the website attempts to present only a simple summary of provisions of the Constitution, the description is highly inaccurate, and should be immediately corrected so as not to mislead the American people as to the true nature and scope of the Second Amendment,” reads the letter signed by leaders of the group including Larry Pratt, Sam Paredes, and former Sen. Bill Richardson.

GOA contends that this ten-word statement is incorrect on two important points.

The first is that the statement implies that the Second Amendment “gives” citizens rights, whereas the group explains in their letter that the Supreme Court recently held in the 2008 case of Heller v DC that the amendment instead “protects” and “secures” a right. GOA also points out that the same White House website mentions that the First and Fourth Amendments, unlike the description of the Second, are explained to protect rights.

The second point of correction asked in the letter is that the term “keep,” from the actual language of the amendment, be added to the description. Again citing Heller, GOA maintains that the right to keep a firearm is separate from that of simply bearing arms and on this point, the bite-sized White House explanation falls short.

This would not be the first time that the Obama White House web team has come under controversy. In 2012 the site came under fire for adding bullet points bragging about President Obama’s accomplishments to the biographical sketches of most modern U.S. Presidents to include Ronald Regan and Richard Nixon. These were later quietly removed.

According to internet archives, the page describing the Constitution has been virtually unchanged since it was first crawled in October 2009.

In an attempt to explain the Second Amendment, a task that gives the highest courts in the land much job security, GOA also included a 62-word suggestion for the White House’s consideration.

The founding fathers, as ratified by the States and authenticated by Thomas Jefferson, then-Secretary of State, only came up with 27.