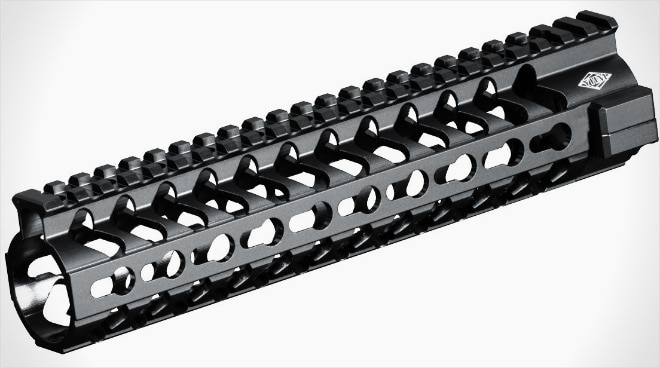 Strike Industries and Yankee Hill Machinery have just announced new free-floating KeyMod handguards for AR-15-pattern rifles. Both company’s handguards are designed to be lightweight and modular, with options for all gas system lengths.

YHM is a leader in the AR industry and it’s not a huge surprise to see them come to market with a spread of KeyMod handguards. KeyMod, an open-source standard set by Vltor, is a popular new mounting system that uses negative space to cut weight. It’s quickly replacing Picatinny rails for accessory mounts.

Like many KeyMod handguards, the YHM SLK handguard system has three KeyMod sections at three-, six- and nine-o’clock and a full-length 12-o’clock Picatinny rail for sights and other flattop accessories.

The SLK series are the lightest handguards YHM has ever made, with the carbine-length rail weighing just 6.7 ounces, including the proprietary barrel nut and all the mounting hardware. The mid-length rail weighs 7.8 ounces and the rifle-length handguard a mere 9.8 ounces, both all-in.

SLK handguards are constructed from 6061 aluminum alloy and have a matte black MIL-SPEC hard-anodized finish. The top rail is T-marked for repeatable zeros and each handguard comes with a hex key and full installation instructions.

They’re competitively priced with MSRPs at $190, $202 and $230 for the carbine-, mid- and rifle-length rails, respectively. More details and specifications can be found on the YHM website.

Strike Industries, a newer name in the AR business, is taking a more aggressive approach to KeyMod with the Mega Fin G2 handguards. Based on an earlier design, these handguards get their name from a series of internal fins that act as heatsinks to keep both the handguard and barrel cooler.

While shooting, heat from the barrel can transfer through the barrel nut down the handguard. The fins add extra surface area to the handguard to dissipate that heat. The outer radius is also ridged which also adds surface area as well as a light texture for an improved grip. 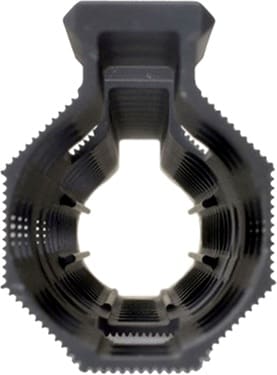 Part of the swiftly-rising success that KeyMod has seen is due to the fact that unlike traditional Picatinny-railed handguards, KeyMod rails are comfortable to grip without panels, bare-handed. The minimalist system is not only lighter but it’s far more user-friendly.

By making the Mega Fin G2 rail cooler, users can shoot longer without having to deal with overheated handguards.

The new Strike Industries handguards also break the mold in another way: they have seven KeyMod sections. These handguards have an octagonal profile with a standard 12-o’clock Picatinny rail and KeyMod cutouts along all the other surfaces, which allows users to install accessories at a 45-degree offset. This is pretty appealing for shooters who like to have a weapon-mounted light. This put a light in the perfect spot for thumb activation.

The G2 handguard has another change from the original Mega Fin design, and that’s shorter, lower-profile fins. As the fins only need to be at the rear of the handguard close to the chamber, the ribs stop partway down the rail to leave added clearance for suppressors.

Strike Industries’ Mega Fin G2 handguards are also offered in a wide variety, measuring from 12 inches to 15 inches in length, with cutout rails for rifles with fixed front sight blocks. In fact, S.I. offers two different cutout rails, one for carbine-length gas systems and one for mid-length systems.

They’re a bit heavier starting at 9 ounces, but are a bit more wallet-friendly. The S.I. Meg Fin G2 handguards start at $145 and top out at $160, making them some of the more affordable free-floating KeyMod handguards on the market. For more information about them visit the Strike Industries product page.

If you’re thinking about going KeyMod for your next build or upgrade, YHM and Strike Industries are offering some pretty compelling handguards now. The weight savings and more comfortable grip is worth every penny.