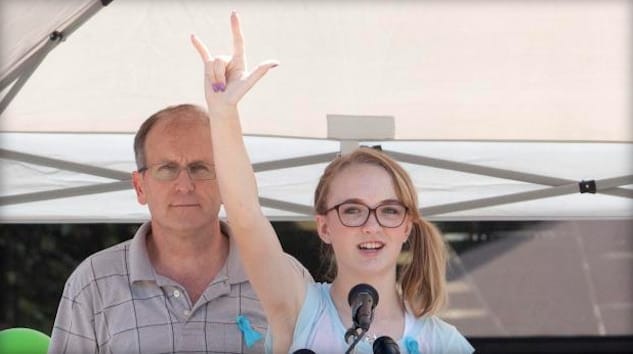 Cassidy Stay, 15, quoted a passage from Harry Potter after a gunman took her family’s lives, and nearly her own.

Harry Potter author J.K. Rowling recently sent a letter to a Texas teen who survived a home invasion shooting that claimed her families’ lives and nearly her own last month.

On July 9, the gunman, Ronald Lee Haskell, 33, entered 15-year-old Cassidy Stay’s home and fatally shot her parents and four siblings. Cassidy miraculously survived a gunshot to the head, and outwitted her attacker by playing dead.

Haskell is described as the abusive estranged husband of Cassidy’s aunt.

After the shooting, Cassidy stood in front of an audience and quoted a passage from Harry Potter where the character Dumbledore says, “Happiness can be found in the darkest of times, if one only remembers to turn on the light.”

Nearly a month later, Rowling responded by sending Cassidy a personalized letter written in purple ink, a wand, and a signed copy of the third book in the Harry Potter series. The letter was an acceptance letter to Hogwarts written in the voice of Dumbledore.

Details of the private letter were not released.

Cassidy has been praised for her strong resolve and willingness to move forward through her extremely difficult time.

“I’m feeling a lot better and I’m on a straightforward path to a full recovery,” the teen said.

Haskell was arrested shortly after the shooting and faces multiple charges of murder.