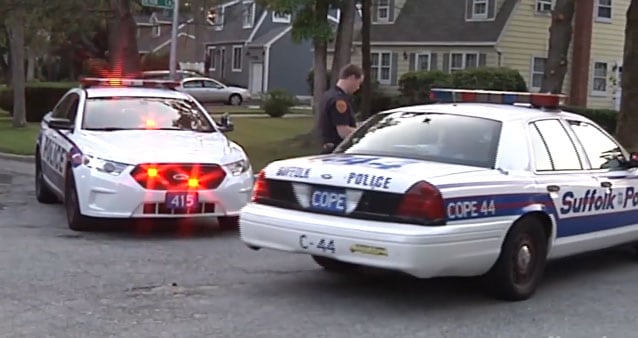 Neighbors told reporters that they didn’t hear the gunshot, which came from inside the officer’s home. (Photo: Newsday)

According to the local ABC affiliate, the Suffolk County Police received a 911 call around 7 p.m. Apparently, the officer, identified as Jon Gigantiello, was unloading his gun when it accidentally discharged, firing a single shot.

Gigantiello received a graze wound on his hand, however, there are conflicting reports about where on his body the toddler was struck. One source said it was in the stomach, another reports it was his arm and at least one claims it was both. However, authorities did confirm that only a single shot was fired.

The little boy was taken to a local hospital where he underwent surgery to have the bullet removed. He was last reported to be in stable condition and is expected to survive. The boy’s father is also expected to make a full recovery.

Neighbors told reporters that they didn’t hear the gunshot, and several also said that the Gigantiello family is very close. They can often be seen playing in the front yard and the father and his son are said to be inseparable.

Gigantiello, an 11-year veteran in law enforcement with a clean disciplinary record, joined the MTA Police Department’s K-9 Unit in 2007. Gigantiello’s first police dog was named “Sarge,” after Sgt. James McNaughton, a police officer who was killed in Baghdad while serving in the U.S. Army. The dog retired and has since died.

It is unknown if Gigantiello will face any charges for the incident.

“At this time, the case is in the hands of the Suffolk County Police and the Suffolk County District Attorney,” MTA spokesperson Salvatore Arena told Gothamist in a statement. “Once Suffolk authorities have completed their investigation, the Internal Affair Bureau of the MTA Police Department will proceed with its inquiry as an administrative matter.”