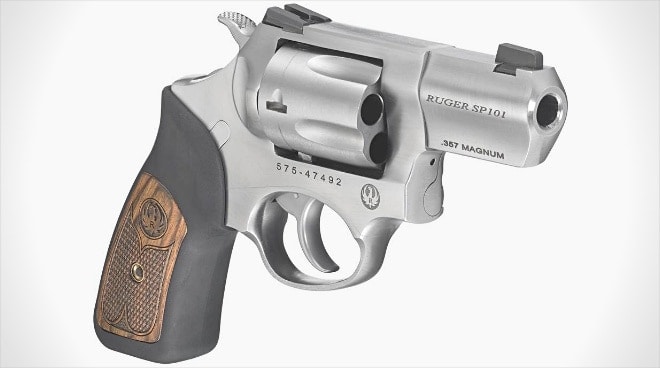 The SP101 with the Wiley Clapp treatment. (Photo: Talo/Facebook)

Ruger and Talo have teamed up once again to produce two new, unique revolvers that are sure to turn heads. The first is a sleek and compact Wiley Clapp SP101 .357 Magnum and the second is a beefy Kodiak Backpacker Redhawk .44 Magnum.

Talo spilled the beans on its Facebook page but did not mentioned specific launch dates. Ruger, on the other hand, listed the Kodiak Backpacker on its product page so the gun may be just around the corner.

They have not yet listed the Wiley Clapp SP101 so details are a bit thin, but it’s clearly based on the existing Wiley Clapp GP100, an understated and capable revolver.

Features that make the Wiley Clapp series stand out include a short barrel, tapered cylinder for easy holstering and dovetailed Novak low-profile sights. These will make great companions for all the Wiley Clapp GP100 owners out there who may have a hard time not picking up the SP101 to complete the set.

There have been two Wiley Clapp GP100 designs, the first, a stainless steel model that this SP101 emulates, as well well as a matte black model — time will tell if Ruger and Talo will do the same for the SP101.

The Kodiak Backpacker, as the name implies, is tailored for users in bear country who want a compact .44 Mag — although you’d be hard-pressed to find anyone who considers it a small handgun. 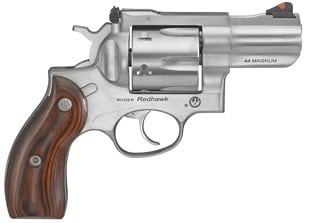 Ruger lists the specifications for the Kodiak Backpacker as weighing 44 ounces unloaded even with its short 2.75-inch barrel.

It’s a six-shot .44 Mag on a full-size satin stainless steel Redhawk frame. The Kodiak Backpacker has a round butt and a small black and red laminate hardwood grip and looks like it should be fast handling and easy to point. The front sight has a bright red insert that’s easy to pick up and comes with a standard adjustable white outline rear sight.

For anyone worried about reduced muzzle velocities out of that short barrel Real Guns found that the Kodiak Backpacker isn’t a slouch in that department, achieving more than respectable energy levels for any kind of trouble in the woods.

They also said the Kodiak Backpacker was easy to shoot and handle with surprisingly low recoil. “Recoil seems more like a quick rearward jab, with a distinct absence of a sky climbing muzzle,” writes Real Guns. “The grip actually seemed a lot easier on my hand and it did not feel in the least bit awkward while shooting.”

A few retailers are pre-listing the Kodiak Backpacker at around $800 which makes it a bit more affordable than some other .44 Magnum revolvers and the Redhawk’s reputation for reliability and durability is unmatched.

These upcoming Talo exclusives will promise to deliver quite a bit. Whether you’re looking for a compact .357 for concealed carry or a .44 Magnum for self-defense from dangerous predators Talo’s got something for you.