Using Suppressors For Hunting on the Table in Florida 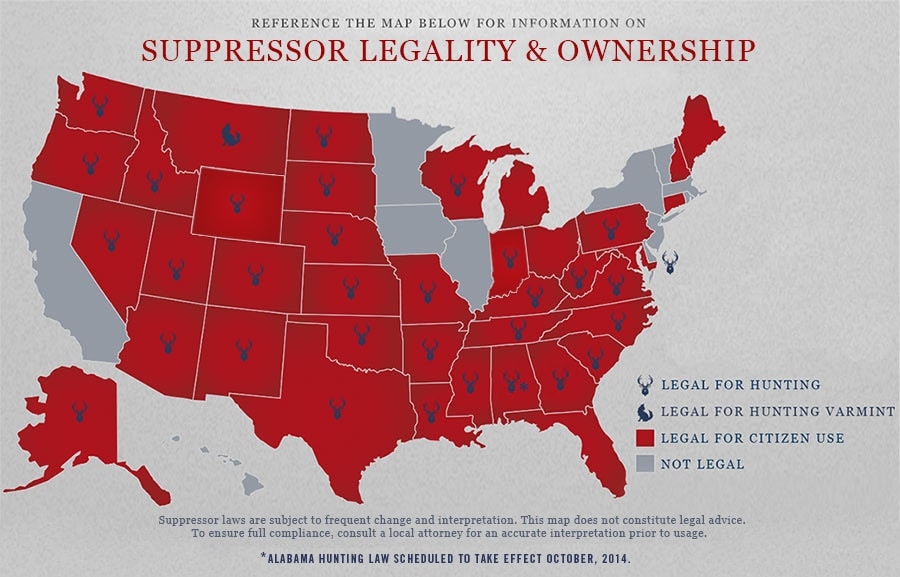 Florida, which allows suppressor ownership, could be the 33rd state in the country to allow their use in hunting. (Photo: American Suppressor Association)

The Florida Fish and Wildlife Conservation Commission will consider making the Sunshine State the 33rd in the nation to allow sportsmen to use suppressors while hunting.

Unlike many states in recent months that have had to push for similar rights through legislative processes, the Florida Constitution authorizes the FWC Commission to enact rules and regulations regarding the state’s wildlife resources. The commission plans to debate a proposal on Sept. 10 to allow legal hunters to take both game animals and pests with federally registered suppressors, or commonly referred to as silencers.

“We’re just trying to give people the opportunity to be able to buy one and use one if they choose. We don’t see enough negatives to not allow them,” wildlife commission spokesman Tony Young told the Sun-Sentinel.

At their September meeting, the seven commissioners will evaluate the future use of firearm suppressors for hunting in the state. Suppressors are legal under state law so long as they are registered under the National Firearms Act, however, prohibitions exist against sportsmen using them for hunting. The agenda for the semi-annual public meeting in Kissimmee will hear proposed rules that would remove the prohibition on the use of noise-suppressed (i.e., silencer-equipped) rifles and pistols for taking deer, gray squirrels, rabbits, wild turkeys, quail and crows.

Suppressor ownership nationwide has exploded in recent years. According to statistics on their website, the number of suppressors registered with the Bureau of Alcohol, Tobacco, Firearms and Explosives under the NFA have risen nearly 500 percent nationwide since 1999.

Between March 2012 and April 2013, the number of legal registered suppressors increased by 37 percent alone, bring the total number of suppressors owned in the U.S. to over 494,000, as the Wall Street Journal noted in an article last October.

“You don’t want to have shooting in the area and not hear a thing,” said Ladd Everitt, spokesman for the Coalition to Stop Gun Violence. “The report of a firearm is how you know if a hunter is nearby.”

Everitt maintains that the reason for the recent surge in relaxation is suppressor prohibition laws is a self-serving effort by the gun industry to increase sales while others express fears of increased poaching.

To this the wildlife commission responds that it was Florida sportsmen who requested the proposed rule change, not members of the shooting industry.

“Thirty-two other states allow hunting with suppressors and there is no legitimate reason for the prohibition in Florida,” Marion Hammer, president of the Unified Sportsmen of Florida and past president of the National Rifle Association told Guns.com Thursday.

Hammer addressed concerns that had been voiced by those who feared an increase in poaching with legalized suppressors in the state by saying, “Those who claim that people who use suppressors to lower the sound will somehow become poachers, and take more game than is legal, are only exposing their bias and lack of understanding of the issue. Poaching is illegal. Poachers are criminals. They can’t seriously expect people to believe poachers will go through the NFA process to legally acquire a suppressor so they can commit crimes with it. That argument borders on the absurd.”

Florida’s proposed changes can be viewed as an extension of the movement towards increased acceptance of suppressors. Earlier this year neighboring state Alabama, by unanimous vote of that state’s wildlife commission, struck down existing prohibitions on hunting with suppressors. This came on the heels of Louisiana, Georgia, and Ohio making similar changes to their hunting laws through comprehensive gun reform legislation. In each of these cases, supporters highlighted increased suppressor use as a benefit to both hunter’s hearing safety and noise consideration to landowners.

The draft proposal before the Florida wildlife commission will receive preliminary consideration at the September meeting, and if successful will, go for final approval at a later meeting. The public will have a chance to speak at each meeting.