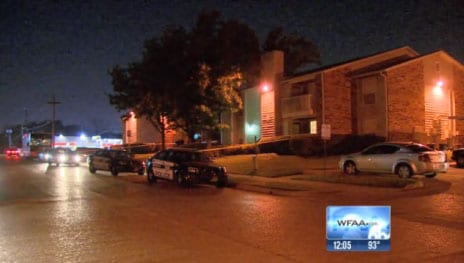 Authorities said the deceased suspect was tied to an armed robbery last month at a convenience store directly across the street from the apartment. (Photo: ABC)

When a group of men attempted to break into an apartment in Garland, Texas, Thursday night, one of them didn’t make it out after the resident opened fire.

Several men tried to kick in the door of the Dallas suburb apartment about 9:30 p.m. The local ABC affiliate reported an exchange of gunfire took place between the suspects and the resident, first occurring inside the apartment then spilling outside.

Joseph Bonilla, who lives in the apartment complex, told reporters he heard the gunshots and also saw the suspects running away. While there are conflicting reports on the number of men involved, Bonilla said there appeared to be several men involved.

“I saw five to eight shots, live rounds, go off. You see the burst of gun powder, the flames come out of the gun. It was very powerful,” Bonilla recalled.

After the shots rang out, all of the suspects took off except one, who was struck by the resident’s gunfire.

As officers arrived, they were met outside by the 22-year-old resident, who’s name has not been publicly released. The man told officers that he had shot a man breaking into his apartment, and police found the injured suspect, who was later identified as 18-year-old Michael Paxton, lying on the floor of the apartment. He was transported to a local hospital. However, Paxton died in the ambulance before he arrived.

Nobody else was injured during the attempted break-in, and the remaining three suspects are still at large. Authorities believe that the break-in was random and the suspects and resident are not known to be acquainted.

When reporters went to the apartment to talk with the resident the day after the incident, they discovered that the apartment was completely empty.