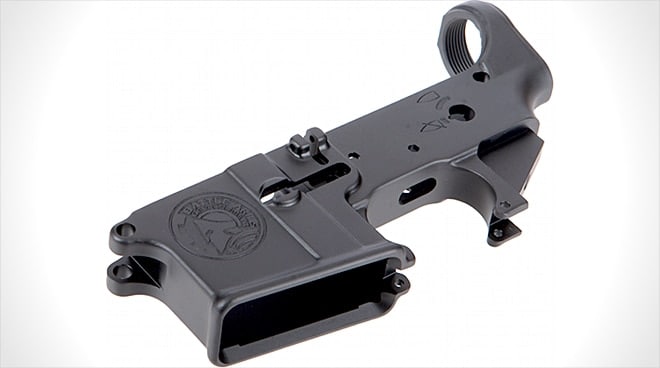 Battle Arms Development, best known for its modular, ambidextrous AR-15 safety selectors, is jumping feet-first into the crowded lower receiver market. Knowing it’s facing tough odds, the company has upped the ante with a receiver made to a higher standard.

Fans and even casual supporters of Battle Arms Development’s may also be lured by this lower for another reason: its looks. Laser-engraved with Battle Arms’ new logo, the receiver is also marked on both sides for BAD-ASS safety selectors as well as for standard 90-degree selectors.

The logo takes up the left side and the company name, multi-caliber mark and serial number are on the right side, both on the mag well. The selector marks are simple bullet and no bullet pictographs.

In many ways these are fairly standard receivers, machined from high-end 7075-T6 forgings with a MIL-SPEC hard anodized matte black finish. They also have a standard trigger guard.

It’s the little things that make this receiver stand out. Battle Arms uses a wire EDM process to cut out the magwell, ensuring perfect precision on every lower and a tool mark-free interior. The magwell is slightly flared and reinforced for durability and easy mag swaps.

The pin holes are reamed, not drilled, for added precision. The threads are helical-cut as opposed to drilled and tapped. And each lower is inspected for flash or other signs of hasty manufacturing. 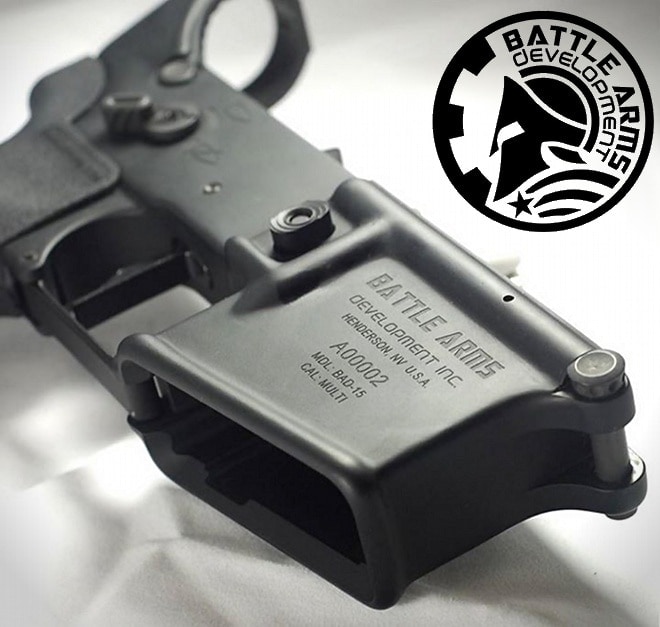 All this adds up to make the Battle Arms Development lower a precision lower receiver. While many shooters don’t give much thought to the quality of the lowers, for everyone that do, this Battle Arms receiver will have a lot of drawing power.

It is currently on sale at Rainier Arms for $198, a slight premium over your run-of-the-mill receiver. With all the extra attention paid to the details we’re sure these will find their way to good homes.

Battle Arms Development has a history of paying attention to detail. The company specializes in a few small things, literally. The BAD-ASS safety selectors have hit the AR market like a comet, with many receiver manufacturers making lowers specifically marked for Battle Arms’ short-throw safeties.

The idea behind the BAD-ASS safety is a customizable design, using a lever-less cam and a variety of selector arms that users can install themselves. This way each user can develop their own personal style of selector configs and run it in their own individual ways.

Battle Arms is also heating things up with its new enhanced takedown pins, which are designed to be easier to use and that can be manipulated with the tip of a bullet if every they get stuck.

If you’re interested in picking up one of these lowers and building a rifle around it, head over to Rainier Arms and for more about Battle Arms Development and their offerings, check out their website.