Low-light combat: Turning the tables on your home-invader 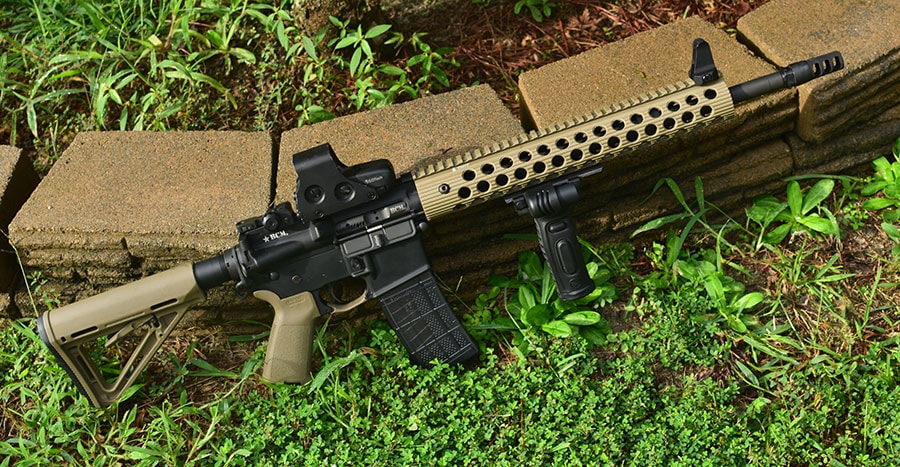 As I’m finishing my preparations for the Crimson Trace Midnight Three-Gun Invitational event this week,  I’m struck at how foreign low-light shooting is to me. I’ve shot in a half-dozen IDPA matches that included low-light setups, but all of these were in controlled environments with known targets and predetermined locations. Furthermore, my attackers in these scenarios are cardboard IDPA paladin targets that don’t move and thankfully, don’t shoot back. In a real-life scenario, things aren’t be so cut and dry.

Low-light combat is one of the most dangerous and difficult environments to employ a firearm in, and should be avoided whenever possible, because target identification and threat verification are nearly impossible when a shooter’s vision is impaired. The problem with advocating avoidance is the fact that criminals prefer the night to commit their crimes, precisely because it makes visual identification difficult.

The only real solution is to be prepared, both with equipment and training – the extent and nature of both depend on what sort of encounter you’re preparing for. Are you more likely to be jumped in an alley or attacked from the inky blackness of starless rural night? Your response will guide your training goals and equipment needs. A city-slicker strapped with a .38 special snub has no use for a massive 900-lumen spotlight, just as a farmer would be woefully ill-equipped with penlight duct-taped to his .30-30. 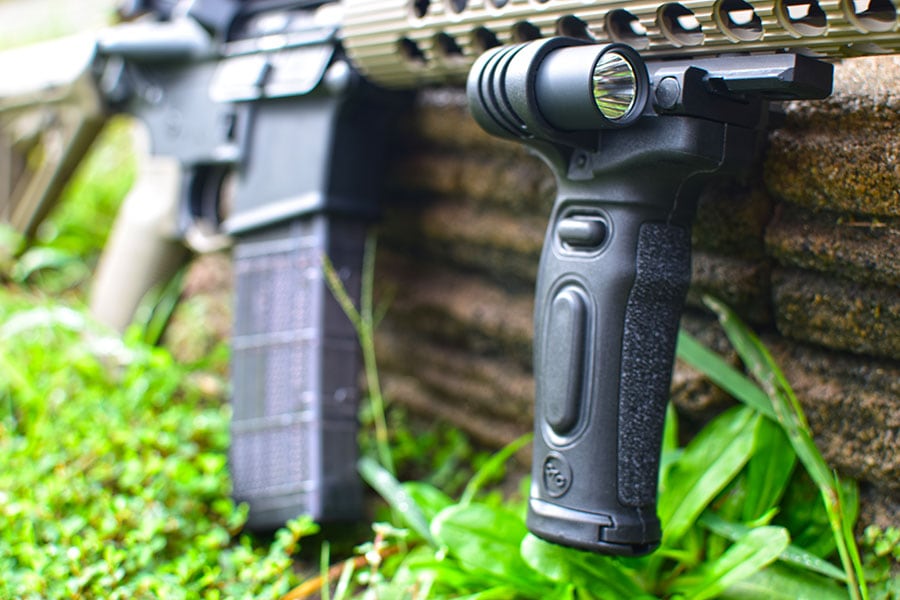 Night-fighters armed with a long gun don’t have the luxury of choosing between a weapon-mounted or handheld light. (Photo: Jim Grant)

Let’s assume you not only carry a gun religiously, but also read up on case studies and the best writers on the subject. You know from memorizing Massad Ayoob’s numerous volumes on gun-fighting and situational awareness, that you should avoid dark areas whenever possible and keep your wits about you at all times. You practice drawing from both concealment and deep concealment every week, and your IDPA splits are good enough that you’ve won a handful of shoots. You still aren’t totally ready to defend your life in the nebulous, ever-changing environment of nocturnal gunfighting.

Don’t get me wrong, IDPA is great martial practice, and it helps solidify the muscle memory required to quickly and accurately draw and engage targets at known distances in the minimal amount of time. However, just like all training, can only prepare you so much for a gunfight. No training, no matter how good, will totally prepare you for the harrowing, life-shattering frantic experience of a fight to the death.

Just as war is often referred to as controlled chaos, so too is any form of combat. The best way to win, is to skew the odds in your favor, any way possible. Especially since you’ll be the victim of an ambush. This means you do not get to choose the where or when, so you must pick the how. Since your attacker wants to take advantage of the darkness, shatter it like dropped mirror with a high-intensity flashlight.  Whether you mount this on your weapon or hold it in your support hand depends on the weapon you’re employing and the school of thought you subscribe to. 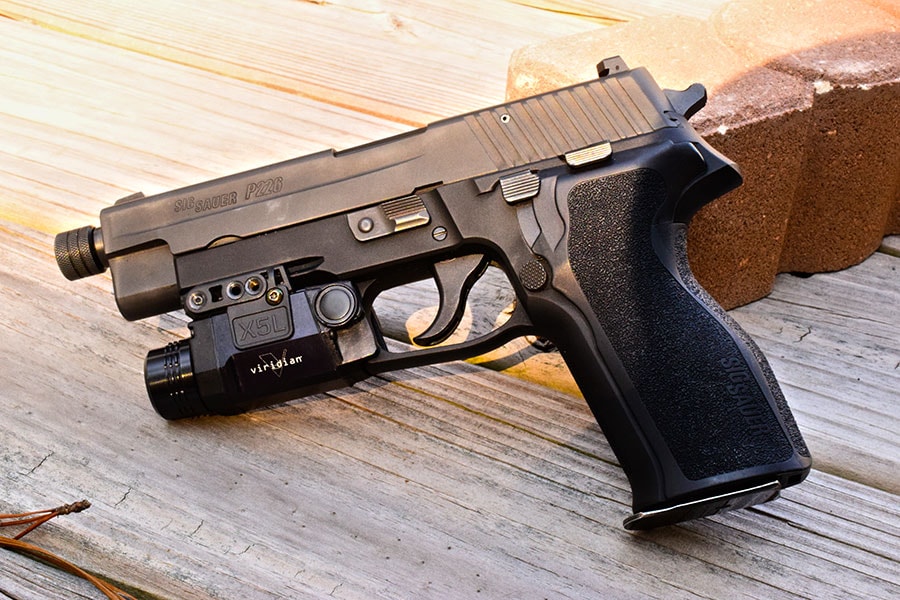 If you decide to go with a weapon-mounted light, the SIG P226 makes an ideal host and home-defense pistol. (Photo: Jim Grant)

Some writers advocate holding a flashlight away from your body with a support hand while aiming your weapon with the strong one. The thought behind this being if your attacker can see nothing but a tactical light, he might shoot at it. If the light is away from your body you risk a shot to the hand or arm instead of the torso or head. The downside of this method is that it takes control away from the shooter, forcing him to use only his strong hand to shoot (which also makes weapon retention more difficult) and this method is limited to one-handed weapons.

The other methodology involves mounting the light on your weapon and is the only method suitable for long guns and gives the shooter both better weapon control and easier access to the flashlight. Also, it frees up the support hand to open a door or dial 911 on a cell phone. This is my preferred method, usually employed on either my Glock 17 or SIG P226.

With all your equipment needs fulfilled, you’ll now have to concentrate on the second, arguably more important aspect preparing for a low-light conflict, practice. Shooting in low-light matches is great for getting used to the fire and fury of muzzle blasts at night and will illuminate several issues you probably never imagined. 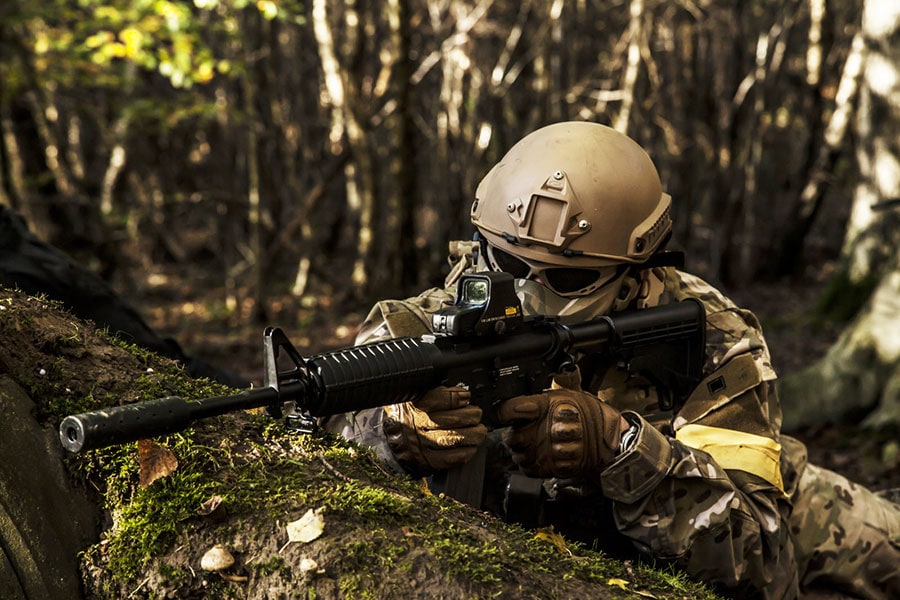 This Airsoft enthusiast might not know much about real guns, but likely better understands the importance of moving while shooting than most gun-owners (Photo: Airsoft-Squared.com)

The second part of your training should consist of airsoft guns in a low-light environment with a friend or partner using flashlights to prepare you for the important lesson of shooting while moving. This becomes even more difficult when you add, “and you can’t see where the hell you’re going” to the end of that sentence.

Even with all this training you’ll simply be more prepared than most, and by no means an expert. If you keep moving during a gunfight and employ a super bright light, you’ll make your would-be assailant’s job of hurting you much more difficult, but not impossible. Train to help negate the many advantages your attack has and flee the fight whenever plausible; a fight avoided is a fight won. However, if you must act, do so quickly and violently; your attacker thinks you’re a victim, not an opponent. Don’t give him any clues to the contrary until it’s too late for him to do anything about it. Above all else, use your head. If cutting through a dark alley saves you five minutes walking to a restaurant, don’t. No shortcut is worth getting killed over.