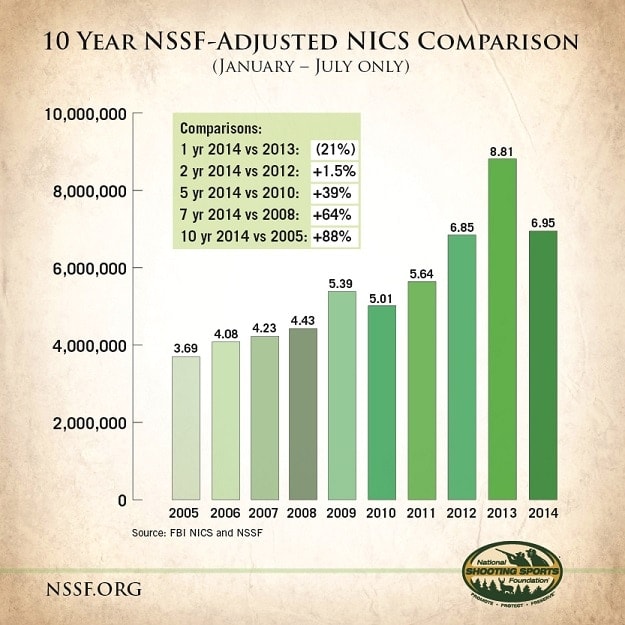 The NSSF explains that NICS checks figures for the first seven months of 2014 are the second highest in a decade. (Photo: NSSF)

The National Shooting Sports Foundation on Monday advised that the drop in gun sales over the past seven months are nothing but a return to normal after an extraordinary year in 2013.

Further, its research contends that if you overlook last year’s huge jump in sales, the number of FBI National Instant Background Checks (NICS) performed so far this year still show significant gains over the past decade.

“The sky certainly is not falling,” said NSSF President and CEO Steve Sanetti in a release by the group Monday. “To me, firearm sales data through the first seven months is saying our industry is experiencing a ‘new normal.’ Like a rocket ship, we’ve returned to Earth, but we haven’t gone back in time. With 2014 on track to be one of the highest sales years in a decade, I call that a sign of a healthy industry serving a passionate, growing customer base.”

According to data available through the NICS system from January through July 2014, the NSSF states that some 6.95 million background checks were performed for gun transfers. While this is not a definite number of firearms sold, as not every approved check ends with a sale and multiple guns can be sold in each approval, it has long been the benchmark for the industry to ascertain an estimate of retail sales.

This figure is the highest in the past 10 years with the exception of last year’s record of 8.81 million checks for the same seven-month period. The NSSF cites many reasons for the extraordinary sales rates that led to more than 14 million checks performed in all of 2013. These include strict firearms restrictions passed in a number of states such as in Colorado,  Connecticut,  Maryland, and New York, as well as increasing interest in owning firearms by women and former servicemen and women.

“People in our business know it is hugely difficult to match a historic, unprecedented surge in customers buying all types of firearms,” Sanetti said.

Few industry insiders realistically thought this year’s figures would match those from 2013, he said.

In recent months, several big players in the gun trade have reported decreased earnings when compared to last year’s figures.

Two weeks ago, Ruger disclosed that its sales were down some 14 percent while earnings had decreased by 31 percent from 2013 due to a reduction in demand. Smith and Wesson, after posting record annual net sales of $627 Million for the fiscal year, predicted a more modest 2015 net sales forecast to be between $585 million and $600 million. At the same time, major gun maker Sig Sauer announced plans to cut its workforce by some 10 percent, citing an overall “cooling” in the firearms market.

Still, Sanetti cautions that the industry’s most active sales months, the holiday and hunting season-fueled October through December, are just ahead.

“With 2014 on track to be one of the highest sales years in a decade, I call that a sign of a healthy industry serving a passionate, growing customer base,” Sanetti said.

He further pointed out that both the violent crime rate and fatal accidents with firearms have decreased about 19 percent and 22 percent during the past decade, which saw these great increases in the number of firearms being purchased by more Americans.

“That’s the most gratifying news of all,” Sanetti said.