Introducing 'the Chassis' by WMD Guns 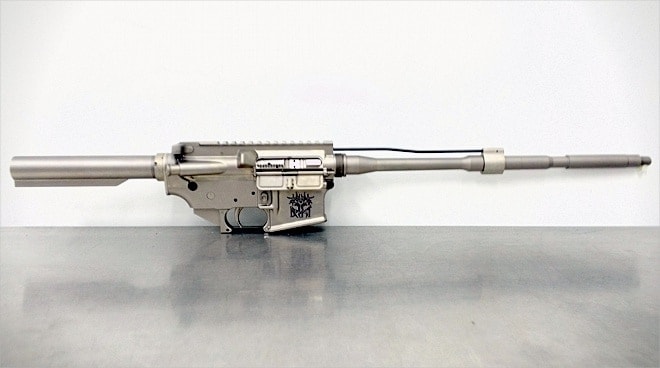 WMD Guns of Stuart, Fla. has recently announced a different kind of AR-15. Called “the Chassis,” this rifle is sold with no accessories, leaving all the final decisions up to the buyer.

The idea is simple: sell a more-or-less assembled rifle, only without any furniture, sights or magazines. This way the user isn’t tasked with breaking down their brand-new gun in order to configure it their way.

This also means that no money is spent on parts and accessories that users are just going to toss in the first place, delivering the product at a lower price point. Bravo Company Manufacturing is one notable company that sells similar uncompleted uppers, but WMD Guns is doing things a little differently with the otherwise whole package.

Based on the WMD “Beast,” the Chassis is a nickel-boron dream come true. Of course that stands to reason as WMD has made a name for themselves with their proprietary “NiB-X” nickel-boron coating and the Chassis gets the treatment as much as possible.

About the only thing that doesn’t have a nickel-boron coating is the bore, which has a salt-bath nitride finish. Nitrided barrels are becoming more popular every day with more and more people selecting them over chrome-lined barrels citing better accuracy and longer barrel life.

The outside of the barrel has a nickel-boron coating along with the bolt and carrier group, the receivers, the barrel extension, the gas block, the fire control group, the buffer assembly and even the charging handle — NiB-X everywhere. The pins aren’t, but if you call WMD and ask nicely, they’re likely to give them the treatment as well.

Like the Beast the Chassis has a precision machined lower receiver and a sturdy and lightweight forged upper receiver, both 7075-T6 aluminum alloy. The trigger has been polished and has a lighter-than-average six-pound break.

The Chassis comes with a MIL-SPEC 7075-T6 six-position buffer tube, a carbine buffer and gas system. WMD Guns offers the rifle with the user’s choice of an M4- or Government-profile 16-inch barrel and the barrels have standard 1-in-7 twists and 1/2-24 threadded muzzles.

By default the rifles are chambered for 5.56 NATO/.223 Remington but WMD Guns will custom-build Chassis rifles with .204 Ruger or .300 AAC Blackout barrels as well as with black or flat dark earth finishes over the nickel-boron treatment.

The Chassis isn’t your average AR-15 and still starts at $999 without the other parts, but that’s good savings over their complete Beast which runs $600 more. But this isn’t a rifle for beginners as obviously, some assembly is required. Some retailers are pricing the Chassis around $900, although for custom options buyers need to go through WMD Guns.

The Chassis is an innovative take on the AR-15 platform contrasting meticulous finishing work and minimalism in the same package. If you’re looking to put together a hard-use AR-15 the Chassis would be a good place to start.

For more information head over to the WMD Guns website and for everything else WMD go to their Facebook page.