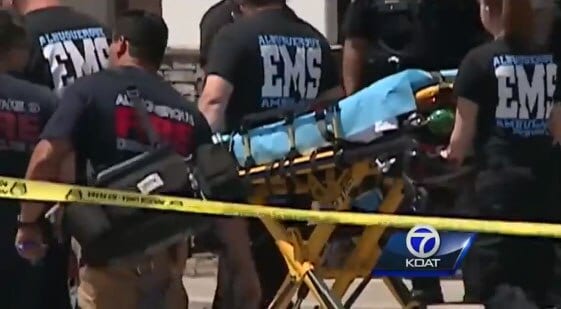 Police said they have tentatively identified the suspect, but the next of kin has not been contacted. (Photo: KOAT)

A suspect in an armed robbery of an Albuquerque smoke shop and hooka lounge Sunday afternoon was fatally shot by an armed employee after returning to the scene minutes after the robbery occurred.

One customer, who did not wish to be identified, told the Albuquerque Journal she witnessed the suspect return to the Oasis Smoke Shop and Hooka Lounge at about 1:20 p.m. She had entered the shop, but was warned by the two employees inside that a robbery had just occurred and it was probably better for her to leave.

At that point, the police had already been called and were on their way, but no shots had been fired.

As the woman walked out of the shop, a man walked past her while pulling a mask over his face. She said she saw him draw his gun before walking into the shop.

“He must have already robbed them, and then for some reason, I don’t know why, he came back,” she said.

When authorities arrived a few minutes later, they found the suspect dead from an apparent gunshot wound. Police aren’t releasing many details and it’s not known if authorities have a motive for the suspect returning after the robbery had already taken place.

Taylor Sadler, a former employee of the smoke shop, said the place has been targeted several times. Police reports indicate that the shop’s alarm has been triggered six times this year alone and on at least four separate occasions police have been called to investigate “suspicious people” on the premises.

“There was a robbery a couple weeks before I had actually quit,” Sadler told reporters. “Someone threw a rock at the window. It was a burglary, 3 o’clock in the morning. Someone had actually stole a bunch of things.”

Sadler said there’s little security at the shop and the owners have asked the Albuquerque Police Department to patrol the area more frequently. The owners had also discussed employees carrying guns for their own protection. It’s unknown if the employee owned the gun he used to shoot the suspect.

No charges have been filed against the armed employee.