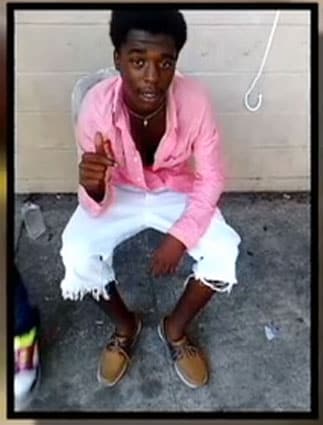 Davion Smith was apparently well-acquainted with gang violence. His brother, also a documented gang member, and his cousin were both shot in drive-by shootings. (Photo: Fox)

A teen boy was fatally shot and a 43-year-old man injured during an exchange of gunfire prompted by the teen showing up at the man’s Lakeland, Florida, apartment last week apparently taunting the man over accusations involving a recent burglary.

Virgis Canteen was the victim of a break-in last month and although he was not home at the time, his security cameras captured several images of one of the teen’s responsible. Canteen, as well as authorities, believed that 14-year-old Davion Smith, a known gang member, was one of the teens seen in the video, but Smith was never charged with the crime.

However, just before 8 o’clock p.m. last Wednesday, Smith and two of his friends went to confront Canteen at his apartment. The teen walked up with gun in hand, but Canteen was armed as well when he opened his door.

Witness accounts indicate that Smith fired first. Canteen fired back and the exchange resulted in both men being shot multiple times in the upper body, while Smith’s accomplices took off. No one else was injured.

Smith was transported to a local hospital where he died about a half hour later. Canteen was also admitted to the hospital, but his current condition is unknown.

At this time, authorities are considering the shooting to be gang-related, and apparently this wasn’t Smith’s first brush with the law. In fact, Smith was already a convicted felon at the age of 12. In November 2012, he was charged with the armed robbery and attempted murder of a 79-year-old man who was shot at a local farmer’s market.

Last week’s shooting was the second to occur at the apartment complex in less than a year. Residents say they no longer feel safe, while authorities fear the decrease in massive gang activity of one nearby area isn’t actually a reduction after all, but rather just a relocation of the violence, according to WFLA.

No charges are expected to be filed against Canteen, who will likely be protected under the state’s self-defense laws.

Neighbors described Canteen as “a really good guy” and “the perfect neighbor.” Spring Waterloo, a nearby resident, said Canteen would sell plates of homemade food and help anyone in need.

Johnny Benniefield, Canteen’s neighbor, told reporters that the man would never have intentionally hurt anybody. He also said the violence and the gang activity has gotten out of hand.