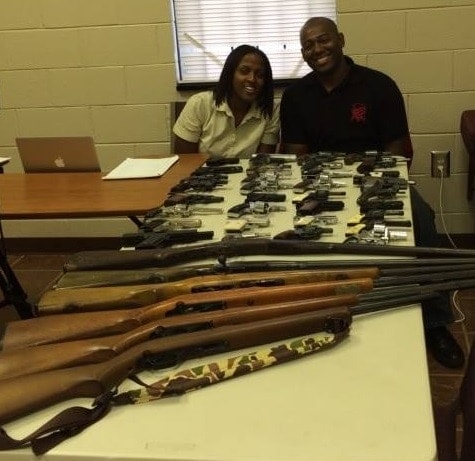 Niki Watson, a Georgia gun buyback organizer, says she felt a “slap in the face” when police auctioned off the guns turned in by the group over the past two years.

The Richmond County Sheriff’s office, who took custody of some 62 firearms that Watson and her group, Future Successors, bought from local citizens at annual Gun Buyback Day events, auctioned them off along with some 1400 other weapons the agency accumulated.

“My whole objective was to get them off the streets,” Watson told the Augusta Chronicle. “I don’t agree with the law that has been passed, and I think we (should) pressure our local legislators to find ways to change that.”

The collection of guns sold by the sheriff’s office went in one lot to a Federal Firearms License holder in Texas, for some $300,000. When Watson found out, she petitioned county commissioners for some 10 percent of the money obtained from the sale, or about $30,000.

Watson argued that she would spend the money to expand the work that her group, a summer program for youth in Augusta, is able to accomplish.

“We spend countless hours organizing events with parents. We do financial workshops throughout out the year,” Watson told WRDW.

With no word from the county commissioners on if she could expect a payout any time soon from public coffers, Future Successor’s latest buyback, held last Saturday at a local church, netted 44 guns. To acquire the haul, Watson handed out some $1600 in Visa gift cards and $500 from her own pocket.

While Richmond County sheriff’s deputies were at the event to check for stolen guns, they only retained custody of five firearms that had defaced serial numbers. The other 39 were reportedly sent by Watson to Atlanta to be destroyed.

“You just adjust to the situation and carry on with your objective,” she said.

The effectiveness of gun buybacks at reducing violent crime has remained a topic of debate in recent years. Some claim they get unwanted guns off the streets and keep them out of the hands of criminals, while others say that they are an ineffective waste of time and resources and nothing more than a feel-good gesture.

Guns.com spoke with local Second Amendment advocates in the state on the issue.

“Who in their right mind would think a gun buyback would do anything to ‘rid the streets’ of a gun?” Jerry Henry, president of Georgia Carry, a gun rights group in the Peach State, told Guns.com Tuesday. “The guns purchased at gun buybacks are not on the streets. They are guns that are either inoperable or guns that people acquired through a death in the family that no one wants. A criminal getting rid of their weapon through a buyback is about as likely as a doctor giving up his scalpel; they both need them to operate.”

Henry maintains that these programs do little to make the community safer.

Guns.com reached out to both Niki Watson and Future Successors for comment and are currently awaiting a response.