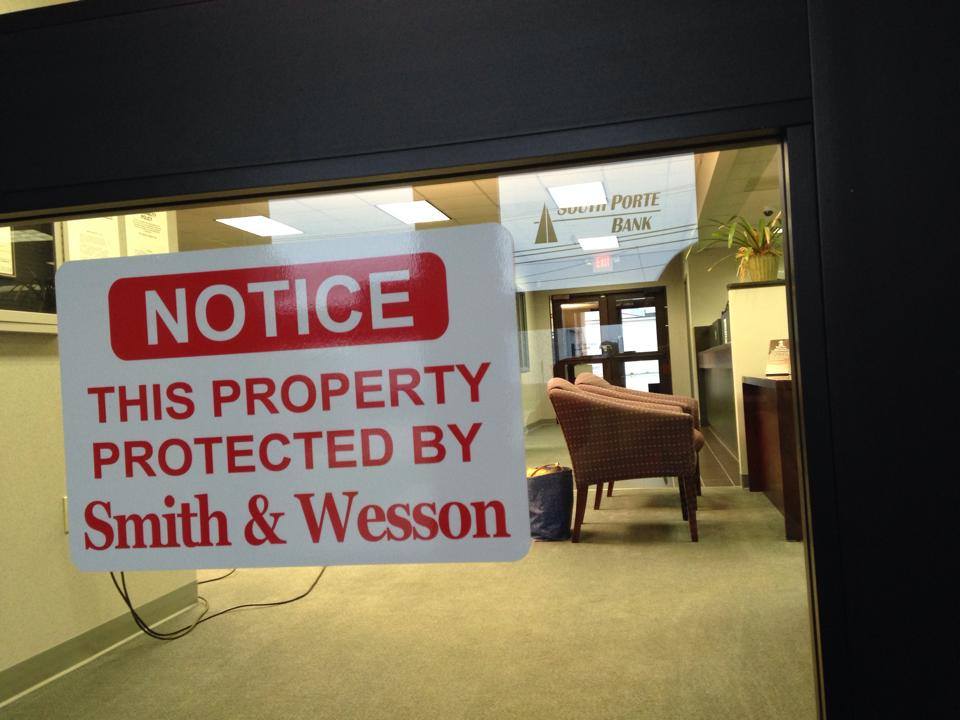 Signs at South Porte Bank in Marion, Illinois advise that the institution is not a gun-free zone. (Photo credit: KFVS)

Banks across the Land of Lincoln are struggling to pick a side on the decision whether to allow legal concealed carry in their institutions under Illinois state law.

Following the state’s implementation of its court-mandated concealed carry law last year, banks were not specifically listed as gun-free zones where carry was arbitrarily denied. This has left these private businesses with a choice of allowing permit holders or posting required signage to forbid carry inside its doors.

“To put up a sign like that you’re basically saying that only criminals, who are going to break the law anyway, are welcome to bring guns in,” Mark Field, the president of Farmers Bank of Liberty, told WGEM. “But law abiding people can’t. I happen to believe that people should be able to defend themselves if they are doing it in a lawful manner.”

Field’s bank is one of a number that have decided to allow carry inside their facilities by default.

Some banks in the state have much more liberal policies on concealed carry.

The South Porte Bank in Marion not only allows legally armed patrons but also authorizes bank employees to carry concealed handguns at work. In doing so, they have even hung signs on the institution’s entrances that proudly state, “This property protected by Smith and Wesson.” Bank employees are reportedly pleased with the policy.

However, there are a number of banks that are going the other way with their decision.

According to the Community Bankers Association of Illinois, more than 100 CBAI member banks have ordered the state-standard 4×6 inch signs to prohibit concealed carry at their institutions. The association offers the signs free to its members and so far has distributed nearly 400.

The Illinois Bankers Association has given its members extensive guidance on the intricacies of the state’s new gun right’s expansion and how it affects bankers. The group contends that, while carrying inside bank buildings can be regulated by owners and leasers, regulating guns in parking lots and in drive-thru tellers are less clear.

While association representatives relate that the issue of guns in banks is sensitive given the threat of armed robberies, they are in the middle of the road on the debate for or against.

“We have not taken a position on concealed carry. It’s up to the banks to determine through internal policies and management,” ILA director Linda Cook told the Bloomington Pantagraph.

According to information from state representatives, 68,549 concealed carry permits have been issued through the end of July in Illinois, while an additional 83,183 people have applied for permits.