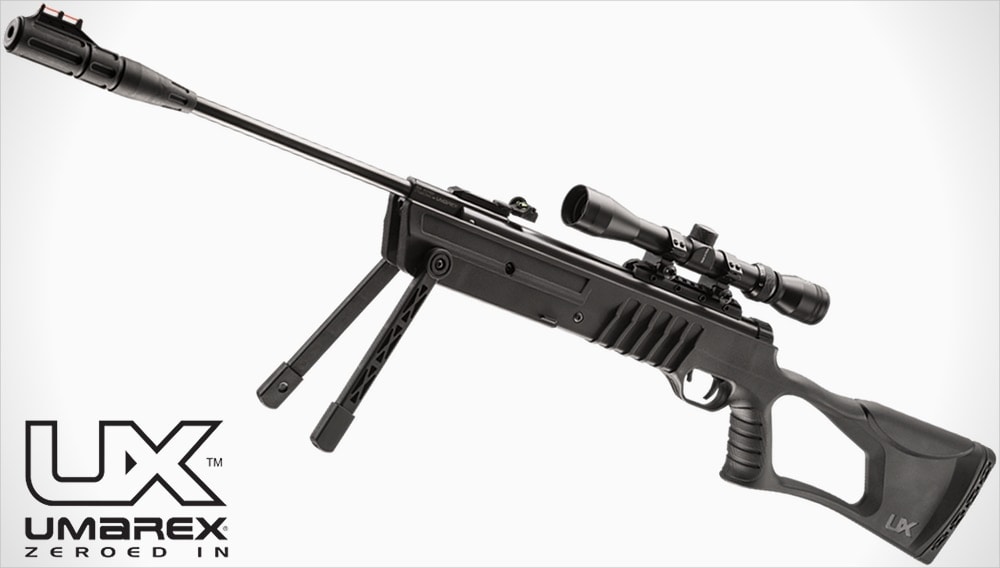 Say hello to the Umarex Fuel. The Fuel is a .177-caliber air rifle for grown-ups. What makes it so adult? Lead pellets traveling at 1,000 feet per second.

The Fuel takes a new approach to piston design. As the company explains, “Instead of a conventional coiled spring, the Umarex Fuel is equipped with the nitrogen powered ReAxis gas piston. Unlike other nitrogen-filled gas springs, the Umarex ReAxis is the first reversed-axis gas piston — meaning the gas strut is turned 180 degrees on its axis causing the larger mass of the strut to push the piston instead of the rod; thereby generating more power, which equates to more velocity and impact than other gas pistons.

By maxing out at around 1,000 FPS this rifle stops just shy of breaking the sound barrier, eliminating the crack of supersonic projectiles, ensuring that neighbors and potential targets aren’t bothered.

To assist in keeping noise to a bare minimum the Umarex Fuel is equipped with a five-chamber noise dampener to capture any gas still under pressure at the muzzle when shooting. Called SilencAir, the device is designed not only to quiet the gun in general, it’s made to eliminate noise downrange, in a nod to small game hunters.

For alloy pellet shooters, the Fuel is capable of generating muzzle speeds of up to 1,200 FPS, putting this air rifle on par with some pre-charged pneumatic rifles.

This gun doesn’t fail to take creature comforts into the equation with its synthetic stock fit with a rubber recoil pad. The thumbhole stock is ambidextrous and supports a built-in folding bipod for tactical and practical shooting.

The Fuel is also equipped with micro-adjustable fiber-optic sights, both front and rear, for easy acquisition. Along with its standard Picatinny rail the Fuel is good to go as far as optics are concerned.

To that end the Fuel is paired with a 3-9×32 air rifle scope, factory-mounted. The trigger is set at 3.3 pounds, a real target two-stage trigger. The blued barrel measures in at just over 18 inches and the complete package weighs 9.5 pounds.

With an MSRP at $225 the retail price for the fuel is expected to be around $200 or less, making this air gun one of the most affordable ways to get behind a trigger while still putting significant energy downrange.

If you’re interested in the new Umarex Fuel check out the product page. Umarex is a well-known manufacturer of air rifles and air rifle replicas of guns made by Walther, Smith & Wesson, Browning, Heckler & Koch, Ruger, Beretta, Colt, Magnum Research and IWI.