'Nugent has got to go,' says South Dakota businessman and NRA member 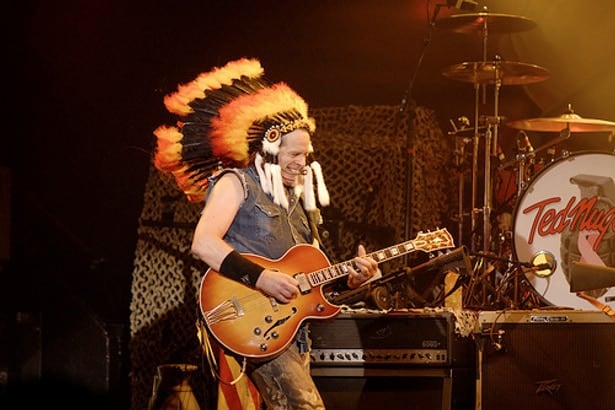 The Nuge doing his thing years ago in an Indian headdress.

“I want to make an unequivocal statement that the kind of Neo-Ku Klux Klan views expressed by Ted Nugent recently about the president of the United States and senior tribal members at Coeur d’Alene are unacceptable and intolerable. Period,” writes Frank Carroll, a columnist for a South Dakota newspaper and a National Rifle Association member.

“They are unacceptable to me as a private person, though his views are his own and none of my business,” Carroll continued. “But Nugent crosses a bright line when he airs his views in public while representing an organization I belong to and agree with on many issues.”

In his column “Nugent has got to go,” published by the Rapid City Journal, Carroll suggests the aging rocker and NRA board member is not responsibly representing the NRA or other conservatives.

“Nothing Nugent said in any way supported the Second Amendment right to bear arms,” Carroll writes in response to Nugent’s inflammatory remarks towards his critics. “He is using us to his own ends.”

Carroll said he’s been an NRA member since he was old enough to pay dues. “An NRA sticker has been on our family vehicles since I can remember across three generations,” he told Guns.com.

Nugent’s current string of controversial comments about political opponents and critics go back to January when he called President Obama a “subhuman mongrel” in an interview with Guns.com.

Although Nugent technically apologized for the seemingly racially charged remarks about the president, the damage was done. The statement along with his rhetoric triggered protests, petitions and at least four canceled shows — most notably by two Indian casinos citing his “racist and hate-filled remarks” as cause.

In response Nugent typically offered dehumanizing remarks towards those behind the cancellation, albeit taken out of context from the verbose speaker and publicized by left-leaning outlets. The remarks are, nonetheless, inflammatory.

A recent Nugent show at the Toledo Rib-Off was reportedly overshadowed by protestors supported by the gun control group Coalition Against Gun Violence. This was compounded by the fact that The Toledo Blade, which sponsored the event, preserved the scheduled appearance under duress but announced before the show that Nugent wouldn’t be invited back.

While Nugent’s remarks could almost always be described as polarizing, in recent times they’ve garnered criticism from both sides of the aisle.

Does Ted Nugent adequately represent gun owners and NRA members? Tell us what you think.