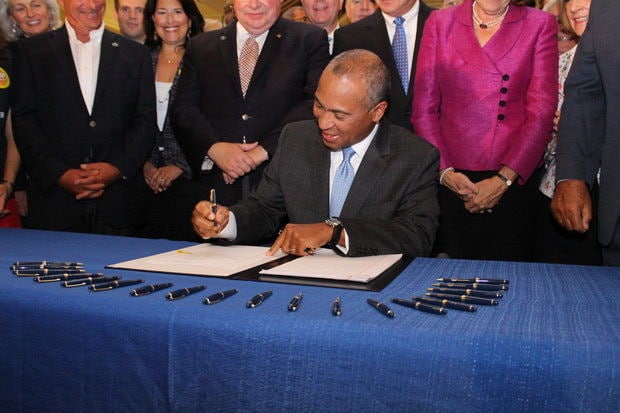 Just two weeks after receiving a bill that will give Massachusetts police chiefs the ability to challenge individual gun sale permits in court, Gov. Deval Patrick signed it into law Wednesday.

The bill will give police chiefs in the state more powers over applicants for long guns as well as increasing penalties for violating storage laws and having a firearm on school grounds. Besides these limits, there are a number of minor positive changes to current gun laws in the Bay State.

“Our communities and our families are safer when irresponsible gun sales and use are reduced,” said Patrick of the bill in a statement. “This Legislation moves us in that direction.”

The measure, H. 4376, “An Act Relative to the Reduction of Gun Violence,” had a long and winding history through the state legislature this session.

The original house bill contained a clause that would allow local police chiefs to deny Firearms Identification (FID) cards, which are needed to purchase long arms such as rifles and shotguns. While it passed that body on July 9 , the measure only made it through the state Senate once the proposed increased police powers were removed.

In its final compromise form, the bill allows chiefs to petition a local court to disallow a FID application after showing cause, rather than having the authority to make arbitrary may-issue decisions.

Besides this, the law requires each school district to have a school resource officer assigned. It also eliminates the distinction between Class A and B licenses to carry, eases restrictions on pepper spray carry by persons over 18 years of age, and other minor improvements as explained in detail by the Massachusetts Gun Owners Action League.

GOAL, a state gun rights group, had been responsible for a number of the concessions worked into the bill in its various forms over the summer. However, they were conspicuously not invited to the bill signing ceremony, an act for which Gov. Patrick later apologized.

“So much for celebrating the historic nature of this bill,” said Jim Wallace, executive director of GOAL. “We worked tirelessly on this bill and were instrumental in getting it passed — and he can’t invite us to the bill signing ceremony? This just proves that gun owners in this state are, and will continue to be, regarded as 2nd class citizens just because they choose to exercise their 2nd amendment rights.”

However, gun control groups were prominent in Wednesday’s ceremonial signing. According to Mass Live, representatives of Stop Handgun Violence and Moms Demand Action for Gun Sense were on hand to make statements. The latter group lauded little publicized language in the new law that will require the state to set up an online tool where private gun sellers would be required to register information about the buyer and receive approval to conduct the sale.

This falls in step with Everytown for Gun Safety’s push toward expanded background checks for all gun sales.

“Real leadership is what will keep guns out of the hands of dangerous people, and we are grateful to have leaders on this issue taking action to protect our families in the commonwealth,” said Molly Malloy, leader of the Massachusetts chapter of Everytown at the bill signing.

Meanwhile, the National Rifle Association had strong words for the legislation.

“Under this new law, having any contact with law enforcement could keep any Massachusetts resident from owning a firearm,” NRA spokesperson Catherine Mortensen told Guns.com. “The law also encourages doctors to ask intrusive questions about gun ownership. This new law is yet another example of why Massachusetts voters must elect representatives who will fight for common sense laws that rightfully place the burden on criminals and not law abiding residents.”

The new law, with its myriad of sections, will come into effect in stages between now and June 30, 2016.