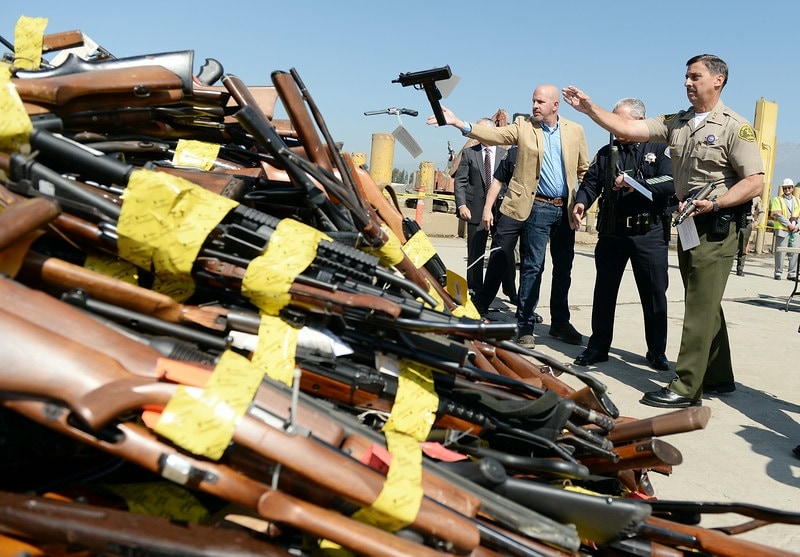 Representatives of 12 California law enforcement agencies throw confiscated guns into a pile of among 4700 that were destroyed in the 21st Annual Gun Melt this week. (Photo: Will Lester/Inland Valley Daily Bulletin)

Thousands of weapons confiscated by law enforcement and collected from gun buyback programs in Los Angeles County were turned over to a steel mill to recycle into rebar Wednesday.

Some 4,661 firearms were collected by a dozen southern California law enforcement agencies including the Los Angeles County Sheriff’s Department, Pasadena Police Department and the Beverly Hills Police Department. The guns were publicly turned over to the Gerdau Steel Mill, located in Rancho Cucamonga, to destroy as part of the 21st Annual Gun Melt.

“The weapons that will be destroyed will never again be used to commit a crime or used to threaten or intimidate an innocent victim,” read a statement from the LASD.

Photos of the event taken by the Inland Valley Daily Bulletin show what appear to be a large quantity of BB guns and black powder cap-and-ball revolvers mixed in with shotguns and rifles. However, there were some collectable firearms destroyed including at least one that appears to be a High Standard Model 10, a vintage bullpup shotgun that dates to the 1960s.

Sheriff’s Department spokesperson Nicole Nishida told CBS Los Angeles that the collection included, “All kinds of weapons, guns that have been altered, converted Mac-10s, we have knives, rifles, pistols, revolvers.” In all, some 178,167 weapons have been destroyed through the program since its inception.

Gun rights supporters criticized the event as just so much public grandstanding with a dubious impact on California streets.

“Criminals will always be able to find guns anytime, anywhere they are,” said Sam Paredes, board member of Gun Owners of California. “They’ll get whatever they want no matter what the laws say.”

Not all departments turn their unwanted firearms into scrap metal. Recently a sheriff’s department in Georgia sold off some 1400 surplus guns, including some acquired through gun buyback programs, to a Federal Firearms License holder in Texas. This move added $300,000 to county coffers.

According to the LASD, “These weapons will be melted into steel reinforcing bar (rebar) and ultimately transformed into elements of construction for upgrades in freeways and bridges in Arizona, California, and Nevada.”