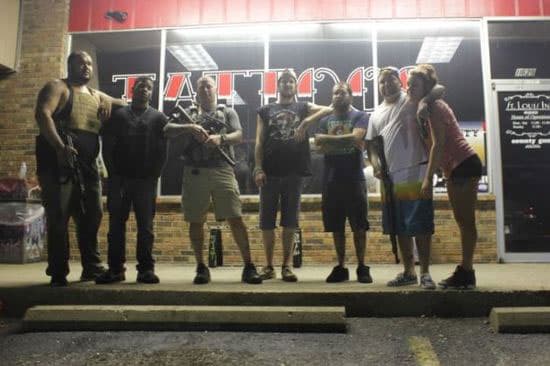 Needless to say, these guys didn’t have any trouble with looters. (Photo: Riverfront Times)

What started out as a peaceful protest Sunday night, quickly turned into a night of violence as riots and looting followed the police-involved shooting of an unarmed teen over the weekend in Ferguson, Missouri.

Some shop owners in the St. Louis suburb refused to stand for the chaotic crime sprees in which two officers were injured, 32 arrests were made and 12 businesses were vandalized and burglarized, including a gas station destroyed after it was set on fire.

The owners of St. Louis Ink Tattoo Studio and County Guns — who share a storefront in the same strip mall — stood guard, letting the looters know their businesses weren’t up for grabs.

“We didn’t want them coming in here and then running around with a bunch of free guns,” Adam Weinstein, owner of County Guns, told the Riverfront Times.

Weinstein, who wore a tactical vest, armed himself with an AR and a pistol, while Mike Gutierrez, owner of the tattoo shop, similarly accessorized.

As the two men and their friends showed up to stand guard, looters were already ransacking a Dollar General store in the same strip mall. The looters began to move toward Weinstein and Gutierrez’s shops, but quickly changed their minds once they saw the men were armed.

Moments later, police arrived and quickly assessed the damages before shooting off to another call.

Other nearby businesses hit by the looters included a clothing store and a Cricket Wireless store.

Silas Chung, who owns Up N Up Fashion, said a window was smashed and clothing racks were stripped bare. He has experienced two burglaries in the nine years he’s been in business, but nothing like this.

“It is what it is.” Gutierrez said. “People just got too into their emotions.”

Local media sites show that several businesses remain closed in wake of the rioting, which died down by about 5 a.m.