Victim of violent home invasion: 'What if I had a gun?' (VIDEO) 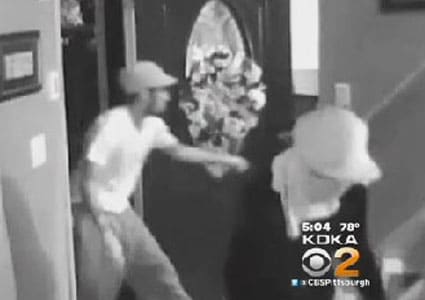 The woman is now offering a $1000 reward in exchange for information which will lead to the arrest of the two suspects. (Photo: CBS)

Pittsburgh police are searching for two suspects wanted in connection with a violent home invasion and robbery which occurred in a Plum Borough home early Sunday morning.

The home invasion, which was partially caught on camera, left a young man injured and his mother feeling violated, unsafe and angry. The family recently had a security system installed in the house and although the alarm was not yet working, the cameras were and captured images of the suspects.

The woman — who did not wish to be identified and asked that her voice be distorted on camera — told a local CBS affiliate she was home alone with her son and his girlfriend when she heard her front door open. She turned to see who it was and that’s when the fear set in.

“And I looked and there was a guy,” she said. “He had a mask on and a gun pointed to me, and I was in shock and just stood there. I don’t know why, but I got up and turned toward the back of my house and tried to go downstairs.”

But one of the suspects caught wind of what she was doing and instead forced her upstairs where her unknowing son and his girlfriend were.

“I kept hovering over my son’s girlfriend. Getting ready to jump out in front of my son and I kept trying to look up cause I thought, ‘I’m going to die,’ and I just wanted to save my son and his girlfriend,” the mother recalled.

She said the suspects wanted money and she told them to take whatever they wanted. And they did, making off with some cash and a laptop, but not before beating her son with a pistol.

“To point a gun and scare somebody, it’s just, you know, we could’ve all been dead,” she said. “They could have even got killed themselves. I mean, you know, what if I had a gun … who knows.”