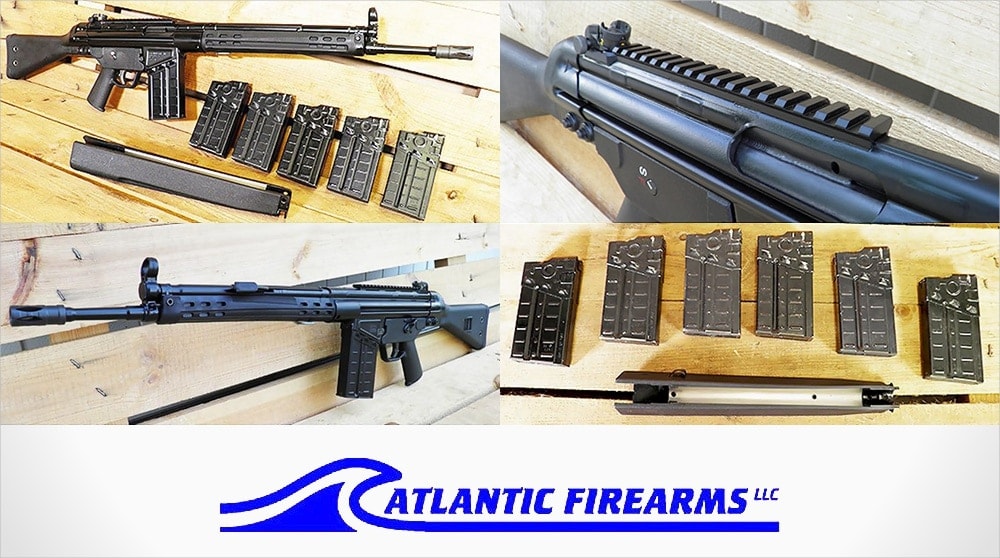 The PTR 91 A3S .308 rifle package includes the gun, six mags, an extra original-style handguard and not shown, a padded hard case for $999.

PTR Industries has partnered with Atlantic Firearms to launch an exclusive rifle package including the PTR 91 A3S chambered for .308 Winchester. This semi-automatic battle rifle is shipped with not one, two, or three but six 20-round magazines.

Like other PTR Industries firearms, the PTR 91 A3S is patterned off the legendary Heckler & Koch G3 but with a suite of small changes to bring it into the 21st century while retaining the proven operating system and timeless features that have made the design so successful. 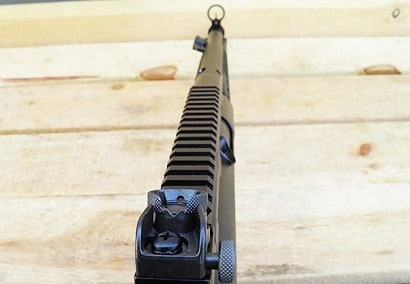 A peek down the renown HK-pattern sights.

While the PTR 91 A3S retains the roller-delayed recoil system, turret-style rear sight, and general look and feel of the G3, it’s been updated with a permanently-attached Picatinny rail for optics, eliminating the need for claw mounts, and is shipped with a slim, modern ventilated handguard.

Other specifications include an 18-inch barrel, threaded with an attached flash hider and an inky black powdercoat finish. Like other PTR rifles, the PTR 91 A3S is compatible with many aftermarket parts including 50-round X Products drum magazines.

PTR Industries has grown a strong following with these durable and well-finished rifles. They’re extremely reliable and the few changes included with the PTR 91 A3S won’t change that one bit. The mags are military surplus and rated very good or better, with some being like-new.

Of course what makes the PTR 91 A3S bundle appealing is the price: $999 including the six magazines, a padded hard case, and a spare original-style handguard for traditionalists. That’s only about $100 more than a standard PTR rifle with all the extras and upgrades.

About the only better deal going happens to be a PTR 91 A3S from Atlantic Firearms. Really. 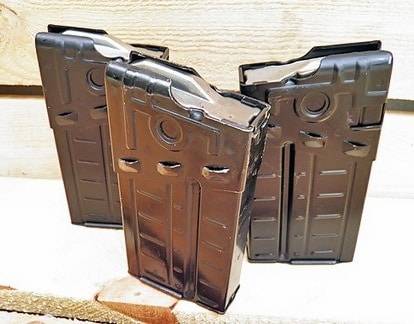 Atlantic has put their base model non-bundle PTR 91 A3S on sale for $949. The rifle by itself ships with just a single magazine but Atlantic sells 3-packs of surplus mags for $24 meaning for $997 you can get a similar kit, including the padded hard case, with seven magazines.

Of course that doesn’t come with the spare handguard but as long as this sale is going some people won’t have any problem with that.

With Russian sanctions in place prohibiting the import of big-bore Saiga and Vepr rifles, PTR Industries is in position to being the next rising star in the market for semi-automatic .308s. As they should be as these American-made rifles have proven to be as unbreakable and faithful as the original German guns.

If you’re looking to get into the semi-auto .308 game but don’t want an AR-style rifle then you definitely should have PTR Industries on your radar. Deals like this make them even more appealing.

For more information about PTR Industries and their products, visit their web page.