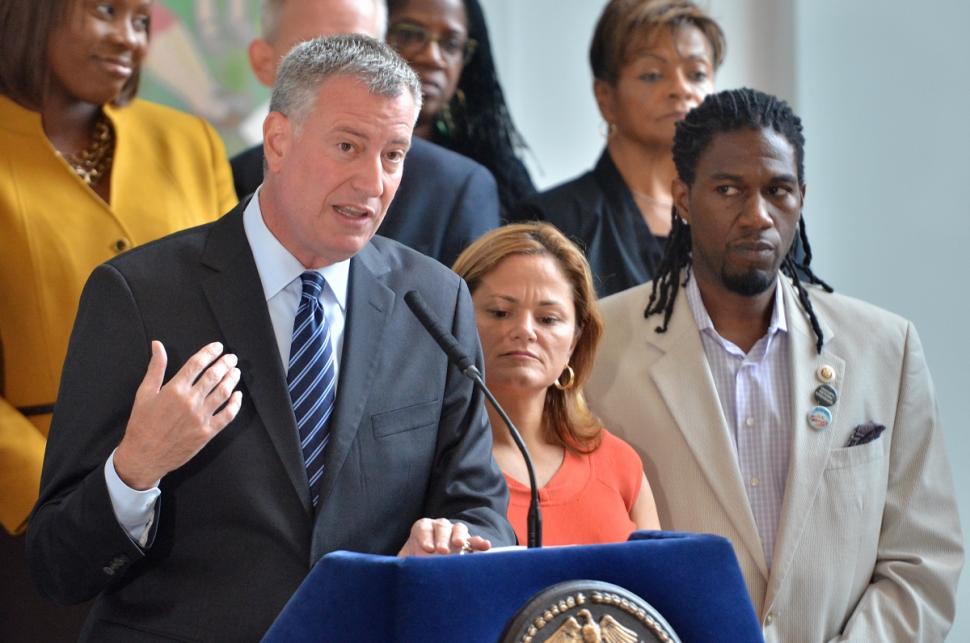 A key facet of the Mayor’s plan, backed by the City Council, are so-called “violence interrupters.” These interrupters will be seeded in high-crime police precincts to disrupt street crime before it reaches the point of a gun muzzle. This comes as the administration’s response to a 12 percent uptick in shootings this year in the City that Never Sleeps.

“While New York remains the safest big city in the nation and crime has continued to drop citywide, gun violence remains a challenge,” said de Blasio in a release. “With this initiative, we are creating a focused effort incorporating mental health services, legal services, after-school programs—using models of proven success and targeting the communities where nearly half of the city’s shootings occur—into our effort to reduce gun violence and create a safer New York.”

The plan is based on the Cure Violence model, which is designed to treat gun violence as a health care issue. The cure proposed is to identify those likely to be involved in gun violence and have a peer intervene before things get out of hand. Targeting 14 of the highest crime areas of the five boroughs, 2-3 specially trained violence interrupters will be sent into each of the police precincts to help defuse crime before it happens.

Interrupters, drawn from former gang members who have been reformed, will reach out to head off retaliatory shootings and negotiate disputes in their areas in an attempt to keep the peace. They will also be a point of contact to win the hearts and minds of current gang members and supply them with information on alternative support services.

In addition to the interrupters, the funds will also help expand community-based preventative services such as mental health and legal services, provide job training, and tutoring opportunities. Further, the program will develop educational materials and messaging speaking out against gun violence, “similar to successful campaigns promoting seat-belt use and against smoking.”

“The cure violence program model has been introduced into some of the most challenging neighborhoods in Baltimore under the name Safe Streets,” said Daniel Webster, director of the Johns Hopkins Center for Gun Policy and Research. “Our research showed that the program reduced gun violence in three of the four neighborhoods where it was.”

Baltimore’s Safe Streets program was based on Chicago’s  CeaseFire program, which was restructured as Cure Violence in 2013.

Although the Baltimore Safe Streets program was cited in a 2012 study by the John Hopkins Bloomberg School of Public Health to have mediated over 200 disputes with the potential to lead to a shooting, it was not without its problems. Last December, the program was suspended in West Baltimore after two ex-convict outreach workers were arrested on charges that included possessing of controlled dangerous substance and, ironically, handgun violations.

The program is funded by a U.S. Department of Justice grant.

It should further be noted that the Baltimore Safe Streets program was modeled on Chicago’s sometimes troubled CeaseFire initiative that also used former gang members in outreach services. Founded in 1995, the group rebranded itself as part of the state-funded Cure Violence program in 2013. PBS’s Frontline noted that at least six of CeaseFire’s outreach workers and interrupters had returned to crime, citing that the group had “at times a tense relationship with Chicago police officers, who were wary of collaborating closely with people they’d arrested in the past.”

Cure Violence has affiliates of varying size set up in some 25 cities.